BY C. MICHAEL BAILEY
May 7, 2003
Sign in to view read count
The year 2003 marks the 30th anniversary of Concord Records. The festivities comprise a year - long celebration honoring the independent label's major milestone. The label represents a true testament to founder Carl Jefferson's commitment to excellence in music, particularly jazz. Coinciding with the Concord's 30-year anniversary is the release of 30 titles in the new Super Audio CD (SACD) format. An additional noteworthy project scheduled for 2003 includes a 5-CD box set that documents the label's 30-year history.

Not mentioned in the media leads is the quiet reissue program of twofers, two-CD sets made up of two related recordings, repackaged and re-released at a single CD price. Concord plans an extensive twofer release program, a good thing as some of the included recordings have been discontinued. For present consideration are four releases having one thing in common—the late Ray Brown. Mr. Brown performs or leads on all eight of the discs represented by the four releases below. Before leaving Concord for Telarc Jazz, Mr. Brown made many notable albums for Concord, as support and leader alike.

In addition to the ubiquitous Mr. Brown are other notable Concord artists. Gene Harris and Monty Alexander, two very prominent pianists in the various incarnations of the Ray Brown trio, are in attendance. Guitarist Herb Ellis shares space with Joe Pass on one disc and the aforementioned Alexander on another.

Often criticized for being a "soft" label—one not willing to take artistic chances, I have always opted to consider the label as a conservative yet swinging musical outlet. There have been true cutting edge music—that of Neena Freelon and Karin Allyson, but the majority of releases are mainstream and straight ahead. And that is okay, because Concord Records does this better than any other label. 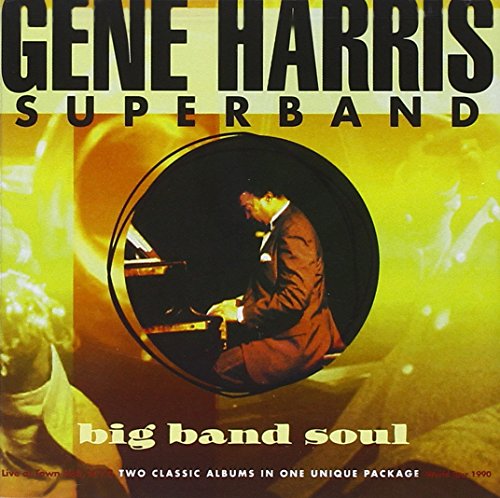 Gene Harris Superband—Big Band Soul is the pairing of Harris' extremely successful recordings with the Philip Morris Big Band previously released as Live At Town Hall, NYC (Concord Jazz CCD 4397, 1989) and World Tour 1990 (Concord Jazz CCD 4443, 1991). The late Mr. Harris proved to be a formidable big band leader, translating songs he was well known for in smaller settings ("Like a Lover" and "Love Is Here to Stay") to some semi-innovative romps through ("Surrey With the Fringe On Top", and "Tricotism"). The songs are all tightly arranged with perhaps too little solo time afforded soloists like Ralph Moore, Kenny Burrell, Frank Wess, James Moody, "Sweets" Edison, and Ray Brown. But, overall, one cannot go wrong with this very fine big band offering. Should the listener like these, I recommend two additional big band discs from the Concord safe house: Gene Harris Big Band—Tribute to Count Basie (Concord Jazz CCD-4337, 1992) and The Frank Wess-Harry Edison Orchestra—"Dear Mr. Basie" (Concord Jazz CCD-4420, 1993).

This twofer is comprised of two very fine trio recordings, each with Ray Brown and Gene Harris and each using a different drummer. The Red Hot Ray Brown Trio (Concord Jazz CCD-4315, 1987) employed Mickey Roker and was recorded at the Blue Note in New York City, November-December 1985. Bam, Bam, Bam (Concord Jazz CCD-4375, 1989) was recorded with Jeff Hamilton on drums at the Concord Jazz Festival, Kan-I Hoken Hall, Tokyo in December 1988. Both recordings included blistering Harris interpretations such as his Gospel-infected gallop through the ballad "Have You Met Miss Jones?" and the Ray Brown-penned funk-fest "F.S.R (For Sonny Rollins)." But ever the leader, these discs still belong to Ray Brown. His sure time and steadiness are famous and in complete evidence here. And, to boot, this collection contains Gene Harris' famous interpretation of the Gershwin classic, "Summertime," perfectly capturing the conflict between desire and repentance, the church and the bar room, Saturday Night and Sunday Morning. The best barrel-house piano one could hope for.

Herb Ellis is a blues master. Born in Farmersville, Texas on August 4, 1921, Mr. Ellis has been an active musician for the past six decades. His chops have not lost a bit of their grit or grip. On Straight Ahead, Mr. Ellis is paired with Mr. Brown and Mr. Alexander— that would be Ray and Monty. Together, the trio has a curious and potent synergy, solidly in evidence on this re-release. Originally marketed separately as Trio (Concord Jazz 4136, 1981) and Overseas Special (Concord Jazz 4253, 1984) Straight Ahead provides a framework from which the listener can grasp the importance of all three of these artists and most particular. Drummerless trios demand an added expertise of perfect time of the participants. This trio meets this demand effortlessly. I site merely "C.C. Rider," "Sweet Georgia Brown," and "Captain Bill," as well as "F.S.R." Horace Silver's "Sister Sadie" comes off perfectly in the hands of the intimately understanding. Superb musicianship, striking empathy.

The true plus here are two of the finest jazz guitarists playing with perhaps the finest jazz bassist. Arrival documents two such meetings between Herb Ellis, Joe Pass, and Ray Brown with the able support of Jake Hanna on drums. Derived from the studio recording Jazz/Concord (Concord Jazz CCD-6001, 1973) and the live recording Seven, Come Eleven (Concord Jazz CCD-6002, 1974), Arrival is the celebration of all things swing with a large dose of Ellington, all performed with a brilliant contrapuntal guitar interplay by Ellis and Pass grounded with the Swiss time of Ray Brown. One need look no further for the guitar summitry of "In A Mellow Tone," Charlie Christian's "Seven, Come Eleven," and "Perdido."