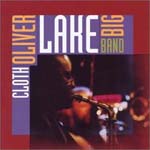 Few musicians in the history of jazz have wielded as wide and diverse a palette as Oliver Lake. Cloth is his first recording as leader of a big band, an endeavor he has undertaken in order to focus more attention on his considerable skill as a composer and arranger.

The opener, "Cloth Two," is a reworking of the leader's tune "Cloth," which he first recorded with his Steel Quartet. The composition and arrangement display the tonal influence of Oliver Nelson with whom Lake studied briefly. Performed over a New Orleans style open snare drum line played by Otis Brown, the lush melody leads into a spare piano vamp by Michael Cochrane, followed by Ron Blake's robust baritone solo, before the leader embarks on a typically searing duet outing with drums, occasionally punctuated alternately by brass and saxophones. A short drum break precedes the reprise of the theme taken out with Winston Byrd's lead trumpet soaring over the ensemble. This is classic big band performance with a decidedly modern sound.

"M.I.L.D." is a plaintive piece dedicated to Lake's wife Marion, featuring tender solos from trumpeter Peck Almond, tenor saxophonist Erica Lindsay, trombonist Josh Roseman and pianist Cochrane. "Dedicated to Dolphy" is the album's longest and most ambitious piece, a suite of sorts, honoring the leader's primary influence on alto. The opening is reminiscent of "Out To Lunch," the second section more Milesian, with Almond's mute moving over Mark Helias' walking bass line before blowing up into smears and growls. There's also a guttural dialogue between Lake and fellow altoist Bruce Williams, a segment suggestive of the Sax Quartet, a straight ahead flute solo by James Steward and a powerful trombone outing from Joseph Bowie.

"'63 Impala" is another previously recorded Lake composition, newly arranged for big band. This version is a medium tempo vehicle for Williams' funky alto and Almond's mellifluous trumpet. "Round 2000" is a beautiful piece from that year that manages to evoke both feelings of sadness and optimism simultaneously. Cochrane, Helias and Lindsay each contribute moving solos. Cochrane again demonstrates his delicate touch on "Dance 6/8," which also features the excellent work of Byrd on flugelhorn and Marty Ehrlich on alto. The album's hit is "Bouncin' Back (Bumpin' Me Against The Wall)," Lake's funky arrangement of the song by the rap group Mystikal that sampled Ellington. This rousing rendition, suggestive of "Papa Was A Rolling Stone" again features a Lake-Williams conversation backed by the screaming sax and brass sections.

The disc ends with "Creole Talkin'," the band's theme song from its recent dates at Sweet Rhythm. It's another bouncing flag waver, one that alternates straight ahead swinging passages with cacophonous group improvisations. Dramatic tension is released by the band's resumption of the melodic line slightly ahead of the beat, a difficult dynamic task executed perfectly, much to the satisfaction of its wildly enthusiastic live audiences. Listeners at home should be no less impressed.