By MARK SABBATINI
January 17, 2005
Sign in to view read count 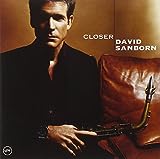 David Sanborn may never again pack the wallop of his early solo career in the 1970s and '80s, but he's still a strong draw for many serious fusion fans and usually demonstrates enough innovation to keep things at least interesting.

Closer continues revisiting his early career styles in the vein of 2003's Timeagain, bringing the core of that album's band to this early 2005 release. It's full of possibilities, but doesn't quite achieve them, as the laid back session fails to deliver sufficient energy. Sanborn still plays more intelligently than most smooth artists, but he's getting to the point where casual listeners may not notice the difference and purists may no longer find enough substance worthy of their attention.

An excellent example of this is "Smile." A ballad with the same name from his 1976 self-titled album became a ten-minute monster of passionate improvisation on 1984's "live" Straight To The Heart. The composition on Closer is entirely different, but it has the interesting premise of reviving a lesser-known work co-written by Charlie Chaplain. Sanborn voices it sweetly with minimal backing and departs from its pleasing hook enough to rank it as one the better ballads on the album, yet it doesn't really excite—especially in a package with so many other low-key treatments. On his early albums they were a chance to breathe between the unabashed fusion of "Mamacita" and "Over And Over"; here they're expected to carry the load.

Or take the opening "Tin Tin Deo," one of the more upbeat pieces. A similar song called "Tin Tin" on 1986's A Change Of Heart is the Schwarzenegger of his funk/R&B resume, a raging and hugely enjoyable—if intellectually harmless—four minutes of screaming horns and electric guitars. "Tin Tin Deo" is mid-tempo with Latin-themed contributions from vibraphonist Mike Manieri—more accomplished but less pleasing. It's the difference between attending a reasonably interesting professor's class and cutting it.

Other songs include "You Must Believe In Spring," Horace Silver's "Senor Blues" and Abdullah Ibrahim's "Capetown Fringe," again, promising in concept but not always in execution. One entirely discouraging cut is the well-hyped "Don't Let Me Be Lonely Tonight," with Verve labelmate Lizz Wright singing James Taylor's well-known ballad. Wright's low husky voice never gets out of first gear while Sanborn only occasionally hits second embellishing.

Sanborn's unmistakable growling tone is in fine form, although he long ago abandoned his upper-register tricks to clones who execute them with varying ability.

The problem with Closer is that I constantly found myself getting drowsy and therefore kept replaying it thinking I might be missing something or failing to relate to Sanborn's artistic intent. Then I went back to his early albums and discovered it wasn't sleep deprivation— Closer was what causing me to drift off. For the most part it's going to remain among a growing list of "what might have been" titles from someone whose legacy I wish could be free of such tarnish.