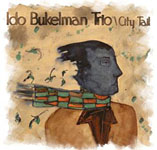 City Tail the debut of Jerusalem-based Ido Bukelman—who works with local artists including The Rats, the Tal Gur Quintet and saxophonist Albert Beger—presents the full breadth of the Israeli guitarist's musical world. Influences ranging from Ornette Coleman's harmolidics to Hendrixian pyrotechnics and progressive rock, and concluding with Israeli popular songs, can all be found on this set of eight original compositions over a spare forty minutes. Joining him are double-bassist Assaf Hakimi and percussionist Udi Shlomo.

Bukelman is first of all a melodist and knows how to tell a story. He is also a highly collaborative player that doesn't always seek the leading role, quite often opting for a supportive one more aimed at closer interplay with his trio mates. The four well-realized, cinematic compositions, "Seagull shore," "Rose scar," "Closed room" and the most beautiful one, "Half-time city," all have suggestive breezy themes that clearly reference the overt melodicism of Pat Metheny, but still flow with originality. They develop patiently, gaining power and volition while leaving enough space for trusting interplay—mainly with Hakimi, who anchors the material with assurance and articulation, as well as with Shlomo's solid timekeeping.

The two compositions dedicated to Coleman—"Ornette" and "Ornette's tail"—lack the necessary harmolidic rhythmic playfulness. Still, Bukelman still stands out by trying to add his own personal stamp with guitar-based harmolodics, especially on the free-form "Ornette's tail," but still in line with Metheny's notable collaboration with Coleman on Song X (Geffen, 1985). Other tracks including "I need a song," demonstrate Bukelman's strong technical capabilities, but fail to leave lasting impressions.