Beresford Hammond: Circle Inside The Folds 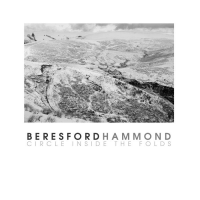 Circle Inside the Folds is the fourth album on The 52nd label featuring the duo of guitarist, pianist and vocalist Charlie Beresford with classically-trained cellist Sonia Hammond, following The Science of Snow (2014), The Lightning Bell (2016)—on which the duo were joined by Beresford's Fourth Page band mate pianist Carolyn Hume and guest vocalist Judie Tzuke—and Each Edge of the Field (2017). Where those three previous CDs came packaged in atmospheric monochrome photographs by Beresford's partner in The 52nd label, Canadian photographer Gaëna da Silva, in keeping with its title the sleeve of Circle Inside the Folds is a neat origami construction, bearing artwork by Beresford and containing a signed, limited-edition (300) print of the cover image. The music itself is well up to the high standard that Beresford and Hammond have consistently delivered since 2014. As before, the combination of her classical background and his folk/improv connections work well together, the two complementing one another, with neither dominating. The fact that they each play an acoustic instrument produces a natural-sounding balance between them so that each can be heard perfectly clearly throughout the recording. While there is ebb and flow between them, sometimes one taking the lead, sometimes the other, that never feels artificial or forced, but a subtly-negotiated process that flows out of the pair's music. This time out, that music consists of seven pieces ranging in length from three-and-a-half to almost seven minutes, a total of forty-one-and-a-half minutes. Each piece seems to be just the right length for the pair to say what they need to, none of the pieces feeling rushed or padded out. Even the shortest track, "Apparat Waltz" (at three minutes and twenty-nine seconds) has a recognisable beginning, middle and end, and adequate time for each player to say their piece without hesitation, repetition or deviation. In common with several other pieces, its pastoral tranquility would not be out of place as soundtrack or incidental music to a film or drama set in the beautiful Welsh Marches, on the border of England and Wales, where Beresford and Hammond both reside. In the quartet Fourth Page, Beresford has habitually improvised vocals (see the YouTube clip of "Times Like These," below, for an example) but—except on their album with Hume and Tzuke—he has not done so in this duo with Hammond. Until now. On the track "Adjust the File," he freely extemporises lyrics to fit the music. As always, the words and music sound made for one another, and flow naturally. Having taken the plunge, this seems like an area for Beresford Hammond to develop further. Some five years into their duo—which was initially a tentative experiment—the rapport and understanding between Beresford and Hammond continue to go from strength to strength the more they play, explore and record together. Listeners who have enjoyed past music by this duo should be very satisfied with this album; those who have not yet experienced them are recommended to test the water.

Homage to Opus 8; Submerged; Apparat Waltz; Mosquito Machinery; Adjust the File; Something Against the Hull; Order of Odonata.