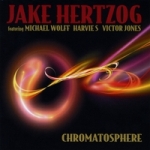 Twenty-two year old guitarist Jake Hertzog, a native of Champaign, Illinois, delivers a truck-load of youthful energy for his power trio release, Chromatosphere. The Berklee College of Music Graduate is helped out on the self-produced, chops-heavy session by bassist Harvie S and drummer Victor Jones. Pianist Michael Wolff joins in on three tracks.

Hertzog's music moves through heavy jazz-fusion, instrumental progressive rock and straight-ahead bebop, all with an explosive, effects-driven edge. Tunes such as the opening "California Hills" and the smooth jazz sounding "Back," have clever, catchy melodies followed by demonstrative, wild guitar solos. The angular "Bonding," "Nectarine" and "Monkey Stuff" have a strong jazz sensibility with Monk-like phrases and open-ended solo sections. The latter features some of the discs more inspired playing from Hertzog, Harvie S and Jones.

Dave Brubeck's "In Your Own Sweet Way" finds Herzog experimenting with adventurous chord- melody voicings. The easy swing groove gives the guitarist plenty of space to fill with his otherworldly clusters. Here, Harvie S is featured on an extended upright solo showcasing his technical mastery. The Rodgers and Hart standard "Falling in Love with Love" is a brief solo guitar rendition with satisfying results.

The disc closer, "Oberon" is an odd-metered mellow rocker, with Hertzog doubling acoustic guitar strumming and clean-toned lines. The tune, much like the entire recording, is an interesting mix of styles and grooves, heavy on improvisation without losing an accessible appeal. Hertzog is a tremendous guitar talent with a developing voice sure to garner widespread recognition.

California Hills; Almost Like Being in Love; Bonding; Back; Lullaby for a Dreamer; In Your Own Sweet Way; Monkey Stuff; Nectarine; Falling in Love with Love; Oberon.