BY MARK SULLIVAN
November 21, 2016
Sign in to view read count
It's that time of year again. While some people genuinely love holiday records, others are just looking for some alternative to have available for self-defense against the onslaught of traditional holiday pop music. Regardless of what camp you're in, here are two new releases, plus three that are new to me: Latin jazz, mainstream jazz, bossa nova, and one that's a retro-pop blend. 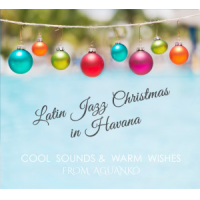 Aguanko is a Michigan-based Latin jazz septet led by percussionist Alberto Nacif. Nacif plays congas, joined by Jose 'Pepe' Espinosa (timbales, percussion); Patrick Prouty (upright bass); Rick Roe (piano); Russell Miller (saxophone, flute); Paul Finkbeiner (trumpet, flugelhorn); Matt Martinez (trombone); and Chris Smith (trombone). They deliver a spirited set of mostly secular Christmas standards, set to traditional Latin dance rhythms. So opener "Santa Baby" is a cha-cha-cha, "It's Beginning To Look A Lot Like Christmas" a mambo, and "Have Yourself A Merry Little Christmas" is done as a bolero. Just about any material can be adapted to a Latin feel if it's done right, and these arrangements are definitely done right. All the songs sound completely natural, as if they were created in this style. The solos and the ensemble playing (the rhythm section especially) are consistently sharp. A great choice if you like Latin jazz and are looking for something different. 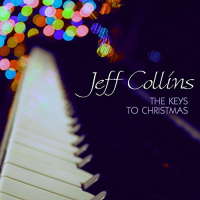 Keyboardist Jeff Collins takes center stage in this often heavily orchestrated set of Christmas songs. There's a mix of religious and secular, but the album opens and closes with Christian hymns. A  "Hark! The Herald Angels Sing/O Come, All Ye Faithful/Joy To The World" medley and "O Come, O Come Emmanuel" bookend a set which also includes "Baby It's Cold Outside," "Let It Snow, Let It Snow, Let It Snow" and "What Are You Doing New Year's Eve?" among others. The brief renditions combined with strings, full orchestra, or big band tend to militate against the jazz feel, sometimes veering close to smooth jazz. A fine version of Vince Guaraldi's "Linus And Lucy" shows the kind of more stripped-down group record the basic band could have made. Collins' piano is joined by drummer Tony Creasman, guitarists David Johnson and Jeremy Medkiff, Hammond organist Jason Webb, and bassists Tim Surrett and Roger Fortner. 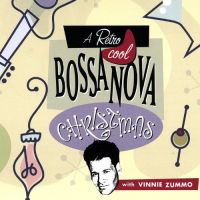 Guitarist Vinnie Zummo (best known for his long stint in singer/songwriter Joe Jackson's band) describes his bossa nova Christmas albums as "stealth jazz," because he was able to play a lot of jazz guitar under cover of the holiday theme. Zummo plays all of the instruments, including nylon and electric guitars, chromatic harmonica and accordion; he and his wife (and frequent performing partner) Janice Zummo provide a bit of background vocals. The program is mostly traditional tunes, like "God Rest Ye Merry Gentlemen," "Jingle Bells," "Silent Night," and "Angels We Have Heard On High." "O Tannenbaum" features harmonica, with Janice doubling the theme with vocalise; accordion takes the lead on the closing original "Christmas Groove." He sneaks in another original while he's at it. The percussion originates with Zummo's live drumming, combined with editing and programming. An enjoyable holiday alternative that does not sound like a one-man band production. 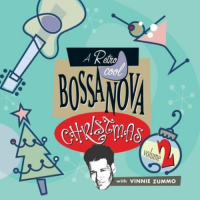 More stealth jazz, but the sequel does include a few vocal features with lyrics, again sung by Janice Zummo. She and Vinnie collaborated on "You're The Greatest Gift For Me," "Christmas Rendezvous," and "There Won't Be A Christmas Without You;" she also sings Irving Berlin's "White Christmas." Instrumental tracks include traditional tunes like "We Three Kings," "Greensleeves," and "Joy To The World." The closing original cheats a little on the bossa concept, but it's no less effective. Zummo again plays all of the instruments, and the chromatic harmonica makes another appearance (he sounds good enough to play gigs on it). The percussion sounds even more natural, no doubt at least partially due to improvements in the technology in the intervening years. 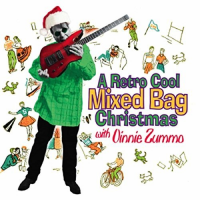 This one is an eclectic mix of pop styles, as the title suggests, and five of the twelve tracks feature vocals. "Jingle Bell Surf Party" is exactly what it sounds like; opener "Jolly Old St. Nicholas" is rockabilly (including a quote from the guitar part in Brenda Lee's classic "Rockin' Around The Christmas Tree"); a new arrangement of "Greensleeves" retains the bossa feel of the previous version; "Blue Christmas" has the country sound of the original recordings of the song. There's even a zydeco arrangement of "All Through The Night," and the Latin "Deck The Halls/Jingle Bells Medley" benefits from guests trumpeter Michael Morealle and trombonist Birch Johnson. In short, there's no predicting what musical style will pop up next. It's great fun, performed with a joyous energy.