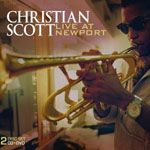 Creativity is most often found outside the boundaries of established tradition. It's while looking outside of those traditional boundaries that an artist frequently finds his or her own voice. In two previous releases, Rewind That (Concord, 2006) and Anthem (Concord, 2007), trumpeter Christian Scott has attempted to do just that. While paying homage to the past, he certainly had his eyes fixed on discovering his own voice; a voice that he would likely describe in terms that while paying respect to tradition certainly would reflect his time spent living outside the boundary.

In Live at Newport, Scott appears to be getting closer to discovering that voice. Seeing him perform live can be an all out assault on one's musical senses and tastes. A live Scott performance can range from the subtle and the subdued, to an all out rock-tinged aural orgy that can leave some audience members confused, perplexed and maybe even a little frustrated. These performances demand emotion and they demand a response. So it is only fitting that this, his third Concord release, be a live recording bringing this experience to a much broader audience, allowing them to make their own decisions.

Live from Newport opens with the hauntingly beautiful "Died in Love," a ballad that benefits greatly from the interplay between Scott's mournful horn and a hard-driving rhythm section of Jamire Williams on drums, Aaron Parks on piano and Joe Sanders on bass. There's a tension created between Scott's brooding sound and the complex rhythms of the supporting cast and it works well here.

"Litany Against Fear," which debuted on the Anthem disc, is reworked here and its opening passage adds a little more texture than the original studio recording thanks in part to musical director Matthew Stevens' guitar. In this iteration, "Fear" is less a vehicle for the group and more an exploration of its individual components. From Steven's solo to Walter Smith III's tenor work, this 11-minute track allows the band to explore more deeply the melodies and moods of the composition than the original studio recording. Smith and Stevens are both accomplished performers and their solos are solid.

It's on "Isadora" that Scott shows his growth as a performer. He uses space as a tool to effectively convey mood and gives the listener an opportunity to hear and appreciate his tone and abilities as a player.

"Rumor" is a 14-minute dose of energy delivered initially by Williams' drumming. All members contribute nicely and it is easily one of the disc's high points. While Parks' solo starts slowly, it steadily builds to a crescendo. It's easy to hear Herbie Hancock in his playing and that certainly is a positive.

The reworked "Anthem" seems to reflect the maturation process Scott has gone through over the past few years. In fact, all three of this recording's previously released selections ("Litany Against Fear," "Anthem" and "Rewind That") all seem to have become more complex—in a good way—since their initial releases. Early Scott fans may experience difficulty recognizing "Rewind That," but those who stick with it will be treated to something special. This is Scott's all-star band at its best, weaving in and out of familiar territory and exploring new space in this 9-minute tour de force. The rhythm section works hard throughout and as his solo begins, it's clear that this piece belongs to Scott. Skillfully aided by Stevens, Williams and Parks, Scott takes over mid-way through the track skillfully weaving in and out of the sounds created by his supporting cast.

There are other high points on this recording, including Stevens' solo on the rocking "James Crow, Jr., Esq." Stevens burns through his solo only giving way to allow Scott and Smith to bring it all home.

The inevitable comparisons to trumpeter Miles Davis will be made as Scott's performance readily echoes that of his musical hero. And while those comparisons are natural, there is something decidedly fresh about his approach to the music.

Live at Newport is a fine recording by a group of musicians who clearly enjoy playing together. And as fans of Scott continue along with him on his journey of musical discovery, this third Concord recording is clearly a giant step in the right direction.