By DOUG COLLETTE
September 22, 2015
Sign in to view read count 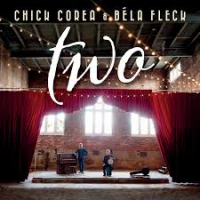 The collaboration of pianist/composer Chick Corea and banjoist/composer Bela Fleck is a magnificent meeting of the minds, one as unlikely as jazz of any era is likely to see and hear. The ever-so-serious and often precious approach of the former is largely contrasted by the playful, though occasionally cute-to-a-fault latter, but the complementary nature of their playing together renders those blemishes of attitude moot precisely because, based largely in the spontaneity of the moments as captured on this set, the duo don't have the time to think too much about what they're doing.

It makes perfect sense, then, for the two to release a live album and in this double CD expanse, Corea and Fleck offer the buying public what they have the concertgoer over the past few years, that is, an enthralling encounter with improvisation that reminds not just how difficult it is to play music well—and in turn how much more difficult it is to play well with others —but just how inspiring it can be at its highest level of execution. In challenging each other, Corea and Fleck transcend preconceptions and dodge expectations, of their own and the audience, generating a series of instrumental epiphanies that become self-renewing.

Interestingly, it takes the pair, like a larger ensemble, some moments to pick up steam, their momentum delayed early on, during "Senorita" and "Menagerie," by between song patter, ingratiating to a fault on both sides, that interrupts the atmosphere generated by "Waltse for Abby," tellingly, a Fleck original recorded for the aforementioned studio album. By the time Corea and Fleck engage in some truly intricate interplay on, appropriately enough, "Mountain," the set unfortunately comes to a close, at least on this first disc. But from a broad perspective, to whet the audience's appetite in such a way is a most pragmatic move, and not an altogether surprising one from two musicians as seasoned as these.

The newly-established partnership pick up where they left off as the opening of "Brazil" on CD two is nothing more or less than the sound of a giant music box playing variations of melody simultaneously, with the two musicians in uncanny sync: Corea and Fleck sound almost as if they are rendering charts rather than playing off each other in the spirit of the moment(s). Still, the sense of liberation shared by the two is palpable on the title tune from their record and the performance of "Bugle Call Rag, " abbreviated though it may be, has its own share of swoops, dives, swerves and straight-on full speeds ahead.

If Chick Corea and Gary Burton's collaborations, such as Crystal Silence (ECM, 1972) and Hot House (Concord, 2012) are the definition of convention, albeit exquisitely wrought, then the former's work with Bela Fleck is the essence of unconventional thinking in concept, while the musicians' execution exhibits comparable formalism, shot through with a whimsy that is utterly winning. The seeds of this ever-so-fruitful mutually invigorating partnership, first planted on Fleck's Tales From the Acoustic Planet (Warner Bros., 1995), nurtured on their studio collaboration The Enchantment (Concord, 2006) found full bloom during the roadwork that is the foundation of this set.

The sterling recording quality it deserves comes courtesy Corea's long-time technical guru Bernie Kirsch who preserves a ringing clarity to hear that belies the diminutive size of the 'band,' but nevertheless enhances the detail and subtlety of the musicianship on display.