By DAN BILAWSKY
November 14, 2012
Sign in to view read count 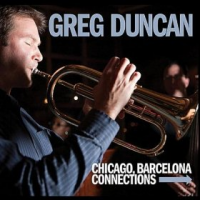 Trumpeter Greg Duncan's Chicago, Barcelona Connections is a spicy dish with duende to spare, but it's not to be mistaken for generic Latin jazz; this is flamenco jazz in a fairly pure form. The Chicago-based horn man experienced his flamenco awakening during a stay in Spain between 2009 and 2010, and the music on Chicago, Barcelona Connections can be seen as an outgrowth of that sojourn.

While Duncan rightly acknowledges the work that piano giant Chick Corea and Latin icon Jerry Gonzalez have done in blending jazz and flamenco music, his own take on these traditions is rooted in the expected, not the pursuit of the new. He wasn't looking to rewrite the book on either genre but, rather, simply honor them both by addressing stylistic norms and standards involved with each area.

Duncan uses his own jazz quintet as the core for this project, but he augmented the band by adding cajon player Javier Saume and vocalist Patricia Ortega. Both musicians prove to be key in bridging the stylistic gap between the jazz and flamenco worlds. Saume is more of a significant and constant presence, but Ortega makes her appearances count. She ups the charm and allure quotient on "Correveidile/Run And Go Tell" and adds to the excitement of "La Tumbona."

Flamenco's various states and forms provide a wide berth for Duncan to navigate, but he sticks to five of the most popular types of flamenco music—rumba, tangos, tanguillos, bulerias and sevillana. He clearly indicates which songs belong to which flamenco species on the back of the CD, but it's not necessary to know that "Reality Versus Myth" belongs under the bulerias heading, for example, to appreciate the music's Corea-like drive and energy.

Duncan's charming, clear-toned horn work is at the heart of everything on this album, but his quintet mates earn their keep and draw some well-deserved attention. Corbin Andrick's bright alto saxophone acts as a foil for Duncan, while drummer Jon Deitemyer deftly blends his propulsive grooves with Saume's handy cajon work. Bassist Patrick Mulcahy proves to be the breakout star of the bunch, providing fusion- friendly electric work ("La Tumbona"), propulsive acoustic riffs ("Reality Versus Myth"), and refined arco lines ("Romance Anonimo"), while pianist Stuart Mindeman serves as the best jazz-flamenco go-between in the band.

Chicago Barcelona Connections is a tale of two cities and two styles, but it's built around one man's clear-eyed view of what they share and how they're connected; Chicago and Barcelona, it would seem, aren't that far apart after all.