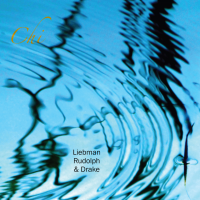 Chi is another trio outing with saxophonist Dave Liebman and percussionist Adam Rudolph, the third leg on this stool being drummer Hamid Drake. It is a kind of follow-up to 2018's alternately serene and propulsive The Unknowable (RareNoise), on which Liebman and Rudolph were joined by percussionist Tatsuya Nakatani. Unlike The Unknowable, Chi was recorded in front of a live audience, at New York City's Stone in 2018.

You'd never guess, though, given the superb acoustics and extremely attentive and rapt audience. There's something about playing for others that a studio recording cannot replicate. Another obvious difference is Drake's contributions, which lean more toward a more Western jazz mindset, particularly when he's behind his drum set. While Chi is putatively an all-improvised set of six pieces, the attention given to such a truly varied program might have involved a fair amount of preparatory discussion.

Rudolph and Drake, it should be pointed out, go back to 1960s Chicago as teenagers, learning the ropes together and soaking it up around such legends-in-the-making like the Art Ensemble of Chicago, established movers and shakers like Sun Ra and Fred Anderson, and blues icons Muddy Waters, Buddy Guy and Willie Dixon. Listen to how "Flux" morphs into "Continuum" and it's possible to be reminded of how the art of the jam is so critical (and often bypassed in favor of established musical norms) to this music, the world of sounds from Rudolph and Drake's more rooted, interactive, jazz-based playing an open door to a patient, intimate series of spontaneous exchanges.

But this is a trio, and Liebman's right at home as he weaves in and out of the group's overall dynamic sonic palette, that includes two pieces featuring piano that upend skyward- harmonics full of life. While Rudolph sets the stage with his more ambient, formless piano and electronic processed seasonings on "Becoming," Liebman's delicate piano musings color "Formless Form" with spritely notes and soothing chords. Drake and Liebman eventually go at it like two experimental jazz musicians on "Formless Form." Meanwhile, Rudolph's light touch on his handrumset and eery multiphonic vocals keep things intimate.

The subtle percussive duo climax within "Formless Form" is a concert highlight. The vibe is so entrancing it just keeps on going with "Emergence," the set's longest selection, featuring more tasty hand work from Rudolph en route to one of the night's steadiest grooves. As with extended spots featuring Drake, this portion of the show amply displays Liebman's strong connection with Rudolph (their initial collaborations stem from an earlier 2016 Rudolph residency). The pace becomes furious, Rudolph's lightning fast handwork on congas a thing to admire. Another groove, this time more funky and driven by Drake, finds Liebman lending some heft on tenor saxophone, chops galore but, again, in service to the song.

The set closer, "Whirl," is a fitting way to sign off: Rudolph's alternately peaceful then driven three-stringed sintir strokes setting the pace with Liebman playing lyrical soprano and Drake lacing it all with sympathetic pings, pokes and pops on his singing frame drum (with a side of vocals). But it is "Emergence" that gets to the heart of what this group's aesthetic seems to be about: virtuosity in the context of vulnerability and humility. With Chi, we are invited to listen and join in.

It's all in there, folks, in the improvisations. And they who go there better have something to say, or else. In creative music, this becomes the essence. The alternative is one boring-ass ego trip.