By Samuel Chell
September 27, 2006
Sign in to view read count

Mingus represents not merely the burden of artistic genius but the composing process in each of us writ large. 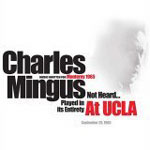 The actual title of this CD is Charles Mingus: Music Written for Monterey, 1965. Not heard...played in its entirety at UCLA. Vols. 1 and 2. The apparent overkill of the title prepares us for more of the same in the accompanying booklet, which contains three essays written for the present release along with some illegible artifacts provided by Mingus himself—the original liner notes, a sample of his hand-written draft, and a snippet from a comic strip he created to advertise his record club. All of the foregoing information might, in some circumstances, be dismissed as moot: if the music can't speak for itself, no amount of rhetoric extraneous to the sounds on the recording can speak for it.

But this was a Mingus "workshop," as he insisted on calling such affairs—anything but "concert." All of the circumstances surrounding the performance as well as the inner workings of its composer-leader-producer were as essential to the event and listeners' appreciation of it as the music itself. Mingus wanted the audience to "see" into the mind of the artist, to experience the creative process as much as the product. Consequently, to the extent that the recording omits visual information relevant to that process and obfuscates our understanding due to off-mic omissions or distorted sound, the narrative and apologia, most of it in the form of Sue Mingus' elegant prose, are arguably integral with the music on the two discs.

As for the music's pretext, Mingus had planned to premiere a large body of compositions at the September 1965 Monterey Festival. For reasons that are not entirely consistent or clear, his time on stage was limited to under thirty minutes, aborting or precluding the performance of most of the new material. A week later, the bassist-leader and his ensemble would perform the complete concert at UCLA. Unrestricted by limitations of time and programming, Mingus would have the opportunity to expose his youthful, receptive audience not simply to his compositions but to his own unobstructed vision of the "workshop" which, moreover, would be recorded by amateur UCLA sound engineers. Subsequently, Mingus would obtain the tapes and subsidize their release in 1966 in the form of a meagerly 200 double-LP sets on his own mail-order label. The music has not been released on CD until now.

As for the performing context, Mingus is surprisingly sensitive to his young audience, at one point catching and practically reprimanding himself for using the word "hell" in their presence. It's true that following two false starts on one of the compositions ("Once Upon A Time, There Was A Holding Corporation Called Old America"), he first berates his musicians (the most humorous moment on the recording), then dismisses half the band for their "mental tardiness," sentencing them backstage to get their act together. But anyone who has heard the infamous "Buddy tapes" by the frequently outspoken drummer-bandleader Buddy Rich is likely to find Mingus's eruption on this occasion comparatively tame. Moreover, Mingus' temperamental moments, like those of Rich, are balanced if not overweighted by the palpable sense of pride and respect he has for his musicians, who respond in kind.

As for the music itself, for starters Mingus' choice of the instrumentation for his octet is curious, to say the least. It could be argued that the three trumpet players get in each other's way and, furthermore, do not serve to strengthen the textures of Mingus' harmonies and bass-led progressions. Perhaps Julius Watkins' French horn was chosen to cover some of the registers normally assigned to Jimmy Knepper's trombone as well as to afford opportunities for satiric commentary (given the instrument's iconic association with "legit" music and formal contexts like fox hunts and battle charges). The inclusion of Howard Johnson's tuba, in any case, makes eminent sense, not only because of its undeniable contribution to the programming of a traditional New Orleans number ("Muskrat Ramble") but because it permits Mingus to switch to piano without any drop-out in the bass part.

Although it's clear that Mingus does not view the performance as coming together until the second half, the present listener may have a preference for the music on the first disc, in part because of its superior audio quality. The opening composition, "Meditation On Inner Peace," is a stunning invitation, featuring the leader playing a rich bowed solo in the cello register over an unabated drone tone supplied by tuba. Gradually the mournful musical prayer acquires intensity as the other players make their individual contributions to the surging layered threnody, which reaches a sonic and emotional climax with the addition of drummer Dannie Richmond's percussive thunder.

The next complete performance, "Ode To Bird And Diz," is at once a playful exchange and a surreal collage, as the members of the remaining quartet challenge their audience to pick up fragmentary allusions to tunes that were once staples of the bebop songbook: "Parker's Mood," "Ornithology," "Bebop," "Shaw Nuff," "Salt Peanuts" and undoubtedly the most chilling version of "Hot House" ever recorded. The elegiac mood is further driven home by Charles McPherson's alto saxophone, with its insistent references to "Alone Together" and "If I Should Lose You."

After the disgraced foursome—Jimmy Owens, Hobart Dotson, Watkins and Johnson—are invited back on stage to redeem themselves, the octet acquits itself well on the first half's final number, "They Trespass The Land Of The Sacred Sioux." Mingus limits himself to playing piano, providing melody notes and rhythmic ideas that are readily absorbed by McPherson during both his solo and harmony parts while Watkins inserts bitonal, out-of-tempo cavalry charges at the places the composer apparently wants them.

The second half of the program starts with "The Arts Of Tatum And Freddy Webster," a composition featuring the little-known high-note specialist, trumpeter Hobart Dotson. The liner notes refer to the limitations of the well-intentioned but amateur UCLA recording crew as well as to Capitol's destruction of the master tape, but fail to warn the listener sufficiently about the audio distortion, especially during Dotson's spirited solo. On the CD the trumpet never sounds integrated with the rest of the group which, moreover, seems both tentative and muddy in their playing of the supporting harmony parts. To be fair to the crew that recorded the concert, recollections such as McPherson's that Mingus denied written parts to the musicians and sang many of the parts to McPherson over the telephone while the altoist at the other end attempted to pick them out on his horn only to have Mingus change his mind the next day, should be factored into the final outcome as much as any technical difficulties with getting the audio right.

Despite these problems on the CD, the audience is clearly impressed by Dotson's fiery proficiency, and Mingus is so unmistakably pleased with the entire performance that he expresses regret the band did not start with the number, proclaiming "everything is fine now." The ensemble remains in Mingus's good graces thoughout the third, primarily successful, attempt to perform "Once Upon A Time, There Was A Holding Corporation Called America" (a composition resurrected by Mingus at a later date as "The Shoes Of The Fisherman's Wife Are Some Jive-Ass Slippers"). During the driving jazz waltz section Mingus is at his manic best, hollering to his old pal, Dannie Richmond, "Love, Dee. It's you and me." Soon the joyous leader is singing along with the music in a piercing falsetto, perhaps to feed the musicians their parts but more likely to express his irrepressible ecstasy over its successful realization. Unfortunately, the singing adds to the considerable audio distortion, directing the present listener's attention away from the music itself to its effect on its creator.

"Muskrat Ramble" comes as a bit of comic respite as well as no doubt a serious nod to the tradition, though McPherson's recreation of the style clearly leaves something to be desired. The polyphonic texture of the New Orleans number carries through to "Don't Be Afraid, The Clown's Afraid Too," a ten-melody fugue that could be judged as at least intermittently successful. The program's finale, "Don't Let It Happen Here," testifies to both Mingus' effectiveness as a narrator as well as his ability to enhance a poetic-political text with appropriate musical equivalents to the sentiments and moods of the spoken part. The warning, moreover, about complacency concerning injustices that don't affect us personally might strike some listeners as no less timely today than in 1965 ("I'm as guilty of genocide as all the rest of you who do nothing").

Some listeners will no doubt dismiss this latest Mingus entry as expendable— marginally listenable, frequently ragged if not sloppily executed music obviously recorded by non-professional technicians—and perhaps such a reaction would be somewhat understandable. On the other hand, to the extent that Mingus' name and mystique extend beyond his music, continuing to attract and fascinate new listeners, this recording of the enigmatic, volatile composer's UCLA performance could be regarded as an indispensable "document," filling in another piece of the puzzle that was Charles Mingus while providing privileged insights into the creative process as well as the private, elusive domain known as the "self." In one respect, Mingus represents not merely the burden of artistic genius but the composing process in each of us writ large. Far from being a megalomaniac or fixed ego, he's the insecure child persistently, valiantly, heroically working to assemble a genuine human identity, which for any of us must necessarily be a work in process. Or, as his widow Sue quotes him, "I'm trying to play the truth of what I am. The reason it's difficult is because I'm changing all the time."