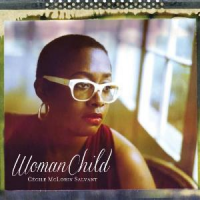 There is no getting away from it, jazz is a 'mature' art form where the considerable achievements of past greats can sometimes weigh heavy on the shoulders of young artists. In the CD and internet era that illustrious past is ever present, constantly available at the click of a mouse, or an inexpensive out of copyright CD. So how does the modern jazz singer compete when, to pick a random example, it is currently possible to buy an official release 15 CD complete works of Billie Holiday for just c$55 on Amazon UK?

Some artists look to solve this problem by filtering the jazz influence through modern technology, a route explicitly ruled out in the sleeve notes' avowal that no samples were used on the album, while others hide behind near terrifying mastery of vocal technique. Cecile McLorin Salvant's solution is different, choosing to present herself through a larger than life persona or character as a way of differentiating her from the easy listening herd. This is not without danger for a young singer—get it wrong and in the eyes of the public you are frozen forever in the image you first chose—think of Angus Young in AC/DC still dressed as a schoolboy as he heads towards his pension. That might seem a strange concern for someone starting out with their debut album, but there is more than enough talent shown in this collection to justify her victory in the 2010 Thelonious Monk Jazz Competition and suggest that she will be with us for the long haul.

There is a clear talent and intelligence in the best performances here —the self penned title track is an absolutely wonderful moment of vulnerability a sharp contrast to the theatrical bar-room blues of the collections best known track "Nobody" that precedes it. But it is that latter track that most clearly illustrates the approach—the voice full of personality and verve runs through a series of mock serious questions on who appreciates or cares about the singer's talents/needs—all answered emphatically `NOBODY'! Live this would be an absolute show stopper, as the autumn 2013 performance on the BBC's Later with Jools Holland attests. The piano from Aaron Diehl in particular, and indeed throughout the collection, is superb contrasting a rolling bar-room swagger to the downbeat lyrics, that keeps things just the right side of camp.

The theatricality also works well on "Jitterbug Waltz" helped along by a great warm vocal performance, and features what the sleevenotes call McLorin Salvant's own developing skills on the piano. Jazz chops are demonstrated on the standard "I Didn't Know What Time It Was" and the country tinged blues of "Have Pity On Me" where McLorin Salvant comes close to stopping time by just singing, backed only by James Chirillo's guitar and some offbeat percussion.

It isn't all so successful though—I suspect because what works as a theatrical presentation on stage can feel overdone in the privacy of one's own living room. For example penultimate track "What a Little Moonlight Can Do" wants to be a daring update of the standard that feels like a live set closer, but in practice is way too long in the context of an album. Similarly "You Bring Out the Savage In Me" angles to be an artfully constructed, ironic comment on the outdated idea of jazz as 'savage' music, but in reality misjudges the strength of the material. The sleeve notes mention how the song hadn't been recorded by a jazz singer since 1935 and, frankly, it should have stayed that way.

But in spite of these relatively minor miscalculations, forgivable on what is after all just a second album, WomanChild gives notice of the emergence of a major talent. At its best this is an album which crackles with warmth and humour and while it may not surpass the jazz vocal greats of the past, McLorin Salvant makes a memorable attempt at developing their legacy. Strangest of all, the detachment she obtains through the theatricality of her multiple personae manages to also make this record feel at times oddly modern. One to watch.

St. Louis Gal; I Didn't Know What Time It Was; Nobody; WomanChild; Le Front Cache Sur Tes Genoux; Prelude - There's A Lull In My Life; You Bring Out The Savage In Me; Baby Have Pity On Me; John Henry; Jitterbug Waltz; What A Little Moonlight Can Do; Deep Dark Blue.