Claire Ritter: Castles In The Air & River Of Joy

By GLENN ASTARITA
November 1, 2001
Sign in to view read count 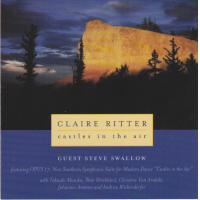 Charlotte, NC-based composer/pianist Claire Ritter has earned numerous awards from various organizations while also teaching at the “New England Conservatory of Music” and garnering kudos for her works, which have been recorded by some of jazz’ best and brightest.

On Castles in the Air, Ms. Ritter spins a symmetrical web consisting of slightly disparate motifs that align into a cohesive series of frameworks, namely with the four-part, “Opus 17: New Southern Symphonic Suite for Modern Dance.” On this piece, Ms. Ritter utilizes small groupings of strings, percussion, vocals, and woodwinds for a series of passages that might elicit notions of tranquility or peaceful environs. Ritter and bass clarinetist, Stan Strickland render a poignant take on Monk’s “Let’s Cool One,” whereas Steve Swallow multitracks electric bass parts during his composition titled, “True.” However, the pianist’s supple phraseology on “Blue Monk” serves as the bond between violinist, Johannes Ammon’s engagingly melodic lines, percussionist Taoaaki Masuko’s bouncy rhythms and bassist, Andrew Blickenderfer’s moderate swing pulse.

Castles in the Air1. Let