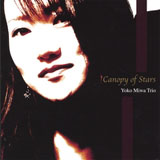 Born in Kobe, Japan but now a Boston area resident, pianist Yoko Miwa offers up another tasty collection of originals for her third release. She is accompanied by her longstanding trio of bassist Massimo Biolcati and drummer Scott Goulding, drums with bassist Bronek Suchanek subbing on two tracks.

In a typically interesting series of tunes, the ballad "Solitude" (not the Duke Ellington standard) begins with bassist Suchanek's arco statement and solo. A variation of that composition "Tango Soledad," is performed in a tango setting with Miwa's piano leading the way. The pianist explains that the connotation of both words (Solitude and Soledad) essentially means "sadness." She wanted to musically voice two different expressions of this and couldn't decide which one to eliminate. To our benefit, both are included.

Miwa reportedly wanted to only play her own music on this album, and with working musicians who were familiar with it. She cites several influences on her work, including modal jazz pianists like Bill Evans, Herbie Hancock and Keith Jarrett. Listening to her agility and chops on Canopy of Stars, however, it is clear that she is not limited to a singular style.