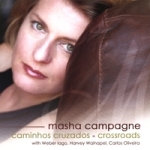 Almost all jazz artists have an interesting back story, and vocalist Masha Campagne is no exception. Originally from Russia, she began her formal musical education in the classical European tradition with studies in cello and piano at Moscow's Gnessin State Musical College. She was introduced to American jazz via her grandfather's record collection that included albums by Charlie Parker, Miles Davis, Oscar Peterson, Ella Fitzgerald and Carmen McRae.

Campagne moved to San Francisco in 1991 and jumped into the jazz scene by joining the Foothill College vocal group, Fanfares, which won first place in the Down Beat's vocal jazz competition. A love of Brazilian music, which she discovered while still in high school via the records of Joao Gilberto, Tom Jobim and Elis Regina, inspired her to create her debut, Caminhos Cruzados = Crossroads.

The appeal of the classic recordings of the Brazilian sound lies in its floating rhythms, intricate and gorgeously understated arrangements, and straightforward vocals. Campagne and company traverse that territory with a spring in their steps combined with a true love of the tradition.

Iago deserves special mention here. His deft and lively arrangements of the Brazilian tunes, along with the bossa tints he gives to Cole Porter's "So In Love" and Rodgers and Harts "It Might As Well Be Spring" are superb. His use of the string quartet on "Pra Quem Quiser Me Visitar" and "O Coco Do Coco" are the set's highlights.

The Campagne/Iago up-tempo take on "It Might as Well Be Spring" is juiced up, jazz style, by Harvey Wainapel's tenor sax and Campagne's saucy vocal, leading into the spare—just Iago's piano and the rich tones of Campagne's voice—"Faltando Um Pendaco." It's a wistful, contemplative closer, to a beautiful set of Brazilian sounds from start-to-finish.