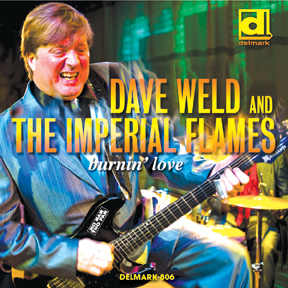 Dave Weld has the blues, which means he stands out from a lot of the today's practitioners, who regard it as an excuse for guitar overkill. In the past, he's played gigs with J.B. Hutto, which puts the seal on it, because Weld's blues are as heartfelt and pure as that slide maestro's.

Consequently, he's not capable of turning out anything contrived. The jangling rhythm guitar on "She's Mine" is life-affirming and, while Weld perhaps lacks some of the vocal weight of his forebears, it's also clear that he means what he sings. When he solos, he does so with a telling appreciation of economy that puts a lot of his contemporaries to shame.

The romp that is "Ed's Boogie" has Khalil Shaheed on vocal and guitar, his presence cementing the Hutto connection. Both he and Weld take guitar solos—Weld taking the single-string option, while Lil' Ed's slide solo teeters on the very brink of the histrionic, before withdrawing back into more telling musical territory.

"Ramblin" is, at the same time, clean and dirty, with Weld bemoaning the cost of living in Chicago in a fashion rife with precedents. Tenor saxophonist Abb Locke delivers a solo with a personal tone: an amalgam of the uptown and the greasy, calling no one to mind so readily as Stanley Turrentine.

Weld claims that Monica Myhre can sing her butt off in the liner notes, and she proves it on "Listen To Mama," which is as greasy as anything here. Myhre's voice has a telling element of sass, and it's clear she knows enough about the blues to realize it's about a whole lot more than declaiming. She doesn't have any of those irritating little affectations either, which ensures she gets the message across. Locke and Weld also contribute solos for good measure, and the resulting five minutes just wouldn't be enough if this band didn't know so much about economy.

"I Got Mad" addresses one of the perennial battles between the sexes, but Weld's a practitioner skilled enough to make something out of such a hackneyed theme. He and his band hit the spot—which, on the basis of Burnin' Love, is second nature to them.

About Dave Weld & the Imperial Flames