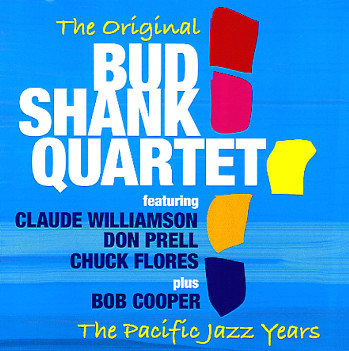 Any debate that might once have raged over the hoary question of East Coast/West Coast dichotomy has hopefully died out by now. If the hope that the music prevails holds water, this is a vessel it's held in.

As an alto saxophonist in the mid-1950s, Bud Shank showed about as much of a Charlie Parker influence as Art Pepper did, and whilst the music his quartet produced here was indeed the product of West Coast sensibilities, its subtleties are many and its fire is generated by the blue flame of pianist Claude Williamson, a player for whom the epithet of The Californian Bud Powell could have been invented.

Williamson's propulsive introduction and set-up for "The Champ" on the first of this two-disc set is evidence enough of this, with both Shank and Bob Cooper on tenor saxophone riding the waves generated by Chuck Flores's bass drum. Williamson's solo here is an example too of how arbitrary any coastal division might have been, based as it was on arbitrary criteria. Time passing has made it seem only more so.

George Shearing's "Lullaby Of Birdland" is taken by Shank and Cooper on flute and oboe respectively, and while something was made at the time of the intrinsic novelty of the combination, here it makes for music with just the right amount of the seasoning of impoliteness. Along with Yusef Lateef and Karl Jenkins, Cooper is the only player to have made something of the oboe, and here his grasp of timbre and tonal nuance is notable.

"Nature Boy" has been overdone, but Shank's flute imbues it with a darkly enigmatic quality even though Williamson plays it lightly and politely. Shank's expansive solo casts him as an unlikely progenitor of James Spaulding, but the fact that it does again gives the lie to that old East / West division.

"All This And Heaven Too" finds Shank inhabiting territory not dissimilar to that of Paul Desmond on the alto, and there's a teasing quality to his work which ensures he's able to mix both joy and melancholy in equal measure. The result is a heady mix which makes time stand still. This is a blessing in times like these, when any form of escapism is welcome, especially when Williamson's dexterity brings the point home.

There's no Cooper on the second disc, but no matter. Shank is positively joyous on the opening "Do Nothing Till You Here From Me," making something of a line that's been done to death in the fifty-odd years since this version was caught for posterity. The performance is a good remedy for jaded ear syndrome, as is the lengthy workout on "Walkin,'" where it's clear how musically close this group was. Everything is topped and tailed nicely, though not to the point where it sounds like the product of slick routine.

Williamson's "Tertia" is a glowingly melancholic line that could have been written for Paul Desmond, but as things stand Shank brings his own sensibility to bear and the results are damn near unique, especially at the point when bassist Don Prell starts walking whilst Shank switches to flute and imbues the thing with an unanticipated measure of sheer charm.

Regardless of stylistic affiliation this quartet and sometime quintet had a remarkable musical affinity. As a five-piece, the group had an identity every bit as strong as the band saxophonist Jack Montrose co-led with Bob Cooper, whilst the four-piece brought their musical understanding to bear on music of such individuality that it exists outside the pratfalls of labeling.


Tracks: CD1: When Lights Are Low; Old Devil Moon; The Nearness Of You; How Long Has This Been Going On / Tea For Two; Lullaby Of Birdland; Somebody Loves Me; Moonlight In Vermont; The King; Bags Of Blues; Nature Boy; All This And Heaven Too; Jubilation. CD2: Do Nothing Till You Hear From Me; Nocturne For Flute; Walkin'; Carioca; A Night In Tunisia; Tertia; All Of You; Theme; Jive At Five; Softly As A Morning Sunrise; Polka Dots And Moonbeams; Pavane / The Lamp Is Low.

CD1: When Lights Are Low; Old Devil Moon; The Nearness Of You; How Long Has This Been Going On / Tea For Two; Lullaby Of Birdland; Somebody Loves Me; Moonlight In Vermont; The King; Bags Of Blues; Nature Boy; All This And Heaven Too; Jubilation. CD2: Do Nothing Till You Hear From Me; Nocturne For Flute; Walkin?