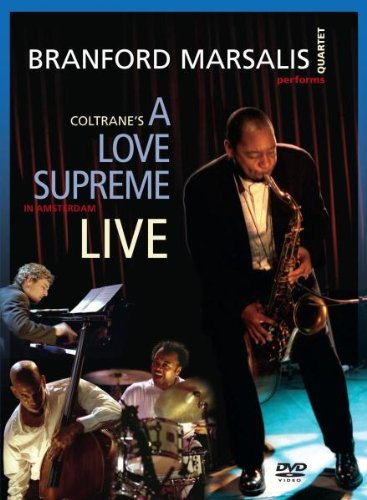 It takes a lot of gumption to tackle a classic like John Coltrane's A Love Supreme , and saxophonist Branford Marsalis has chosen to do it not once, but twice; first on the '02 CD release, Footsteps of Our Fathers and now on his first live DVD, Coltrane's A Love Supreme Live in Amsterdam. It demonstrates just how much the quartet, featuring pianist Joey Calderazzo, bassist Eric Revis and drummer Jeff "Tain" Watts, has grown in the two years between releases, taking Coltrane's revered suite and truly making it their own.

There's an unquestionable reverence in the way that Marsalis' quartet approaches the material, yet through it all, their individual voices ring through clearly. Calderazzo may have emerged as a post-Tyner pianist in the late 80s, but he's since moved on, colouring things with a more fluid, less blocky post bop style. Watts may be inspired by Elvin Jones' triplet feel, but he's equally rooted in Tony Williams' more muscular and elliptical style. Revis shares Jimmy Garrison's earthy tone but is, in fact, a more dynamic player, and when locked in with Watts creates a unique sense of groove that swings as hard as anything Jones and Garrison ever did.

As for Marsalis, he's clearly done his homework, but whereas Coltrane could sometimes be accused, especially in his latter, post-A Love Supreme days, of perhaps being almost overwhelmed with ideas, Marsalis takes his time, developing his motifs more gradually. His technique is formidable, and he is certainly capable of emulating Coltrane's "sheets of sound" approach, especially during his staggering solo on "Part 3 -Pursuance," but his tone is warmer and less dry, less acerbic.

It would be unfair to draw too many direct comparisons between Marsalis' version and the original Coltrane classic. Still, while Coltrane was as much about moving music forward as it was drawing a direct link between music and spirituality, Marsalis' interpretation is more about consolidation and revelling in the pure joy of playing. In an interview segment that makes up one of the bonus features of the DVD, Marsalis talks about instructing the band to become so intimately familiar with the source material that when it came time to perform it they would be reverential without being imitative; that earlier attempts began as more direct homage, but as time went on, the playing evolved to another place, where the group's own sound began to emerge.

In another segment of the bonus features, where Marsalis is discussing the performance immediately afterwards, he describes the difference between a good performance and a great performance as being that something indefinable that goes beyond merely playing the notes. Clearly the quartet's performance of A Love Supreme on this particular night in March, '02, transcends simple playing. The way that the group manages to capture the slow simmer of "Part 4 -Psalm," is quite remarkable in its ability to be powerful and deeply passionate in a subtle and somehow restrained way. And while it is unlikely that Marsalis will go down in the history of his instrument as being as influential as Coltrane, he will unquestionably be remembered as a significant player who blends an archival interest in jazz's many periods with an unerring musical instinct, an ability to transcend mere dedication to his craft and, instead, create music that is deeply personal. It is, in fact, this ability to create such an individual sound and approach that makes it possible for him to tackle such a revered classic as A Love Supreme and elevate it to a level that is exciting and, at the end of the day, completely valid as its own musical statement.

Along with interviews with the band members and others including Miguel Zenón, David Sanchez and Michael Brecker, the DVD boasts a 30-minute interview with Alice Coltrane that sheds light on John Coltrane the musician and the man. Coltrane also discusses the vibrancy of the New York and Detroit scenes of the early '60s, and how this contributed to a climate that made groundbreaking recordings like A Love Supreme not only possible, but essential. And as yet another bonus feature, an audio CD of the 48-minute performance of A Love Supreme is included. All-in-all, a fine package that combines an exciting performance with nearly an hour of fascinating interview material, making Coltrane's A Love Supreme Live in Amsterdam a worthwhile investment for anyone interested in both seeing and hearing how an influential recording can be taken and given continued life forty years after initial release.