By IAN PATTERSON
February 8, 2015
Sign in to view read count 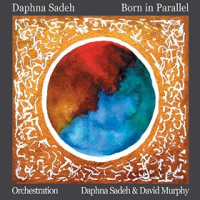 Bassist/composer Daphna Sadeh may have left her native Israel over a decade ago but the country's colorful musical potpourri is firmly embedded in her DNA. For Sadeh, the confluence of Arabic, Eastern European and Mediterranean influences that resound throughout Israeli culture have provided the building blocks for her longstanding, UK-based ensemble The Voyagers on albums like Reconciliation (Tzadik, 2009). After a five-year break from the recording studio Sadeh returns with Born in Parallel, her most ambitious compositional work to date.

Thirteen musicians spanning the worlds of jazz, folk music and classical baroque interweave their threads in a four-part suite orchestrated by Sadeh and David Murphy, the internationally renowned conductor who has garnered significant critical acclaim for his premieres of works by sitarist Ravi Shankar and sarod player Amjad Ali Khan. The suite is nominally inspired by the ancient Greek's belief that the four elements created all forms of matter but more concretely shaped by Sadeh's musical vision, one that transcends history, geography and cultures.

The episodic "Fire" shifts between urgent and meditative passages, between heady Middle Eastern dance rhythms-with flute and trombone central—and baroque pastoralism. Sadeh and Murphy strike a fine balance between enabling soloists and crafting the ensemble voice, with the rotation of instrument combinations a fairly constant feature of the suite. Strings and reeds dovetail on the intro to "Water," before oboe and flute entwine. A chain of bluesy solos of an Eastern hue commencing with soprano saxophone and on through double bass and trombone, constitutes the first half of the piece. A brief orchestral interlude sets up Joe Crouch's captivating unaccompanied cello whose lyricism is tempered by melancholy. All the strands of this mini-orchestra come together on the closing section where a pretty motif is repeated mantra-like by individual and ensemble voices.

In an interview with All About Jazz in 2009 Sadeh stated: "I'm not avant-garde. I used to play avant-garde jazz but it's not my style, I'm not interested in that. I just want to make music that will come into the hearts of people. That's it." With Born in Parallel's orchestra of world musics Sadeh does just that, expanding and refining her somewhat unique musical idiom with this mellifluous, emotive and genre-less offering from the heart.