BY JACK BOWERS
January 8, 2019
Sign in to view read count 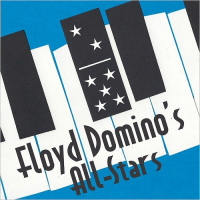 On the debut album as leader of his Texas-based sextet (enlarged to seven-strong on seven numbers by the reliable vocalist Emily Gimble), veteran pianist Floyd Domino plays his trademark Western swing leavened with large doses of blues, boogie, stride and barrelhouse. There's a touch of jazz secreted therein too, but no matter what one calls it, Domino's music is always fun to listen to and enjoy.

In Domino's capable hands, even the standards "Between the Devil and the Deep Blue Sea," "Exactly Like You," "Tea for Two," "After You've Gone" and Irving Berlin's "Blue Skies" are given a boogie / blues makeover, as is Benny Moten's venerable big-band benchmark, "Moten Swing" (performed by Domino with the rhythm section). The group opens with the well-grooved "Boogie Minor" and also performs "Riff Blues," "Honeysuckle Rose," "Do You Know What It Means to Miss New Orleans," "Mess Around" and "Way Down Yonder in New Orleans" before closing with the stride classic, "After Hours" (again, Domino with rhythm).

Aside from Domino, the most-often-heard improviser is cornetist David Jellema, with tenor saxophonist Lauryn Gould having her say (briefly) on "Boogie Minor" and (more extensively) on "After You've Gone." That's a minor point, however, as it's clear that Domino didn't bring anyone on board for his / her solo skills but to follow his lead and play snugly together as a unit, which they do. The rhythm section, which includes guitarist Brooks Prumo, bassist Bryan Gould and drummer Hal Smith, lends Domino able support throughout. As for the leader, his rumbling left-hand-heavy piano sounds at times like a rhythm section unto itself.

Domino has been around the block more than a few times (he won two Grammy Awards as a member of the group Asleep at the Wheel) and knows what he's about, which is to present music that requires well-honed talent but isn't so deep or daunting that it fails to leave a smile on the listener's face. Even though there's not much jazz here (and the playing time is a modest forty-five minutes), Domino readily drives home his Stetson-underlined point.

Boogie Minor; Between the Devil & the Deep Blue Sea; Riff Blues; Honeysuckle Rose; Do You Know What It Means to Miss New Orleans; Mess Around; Moten Swing; Blue Skies; Way Down Yonder in New Orleans; Exactly Like You; Tea for Two; After You’ve Gone; After Hours.