By David Rickert
November 7, 2004
Sign in to view read count 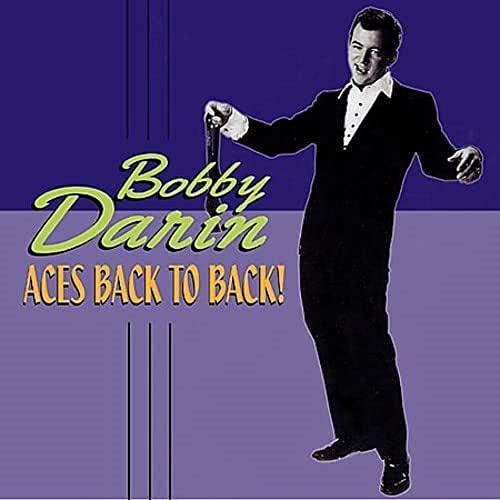 Bobby Darin
Aces Back to Back!
Hyena Records
2004

For a time Bobby Darin's reputation rested solely on two songs: "Splish Splash" and "Mack the Knife." Taken together, they represent Darin's transition from the teen market to the adult market, something that very few were able to do. But they are also emblematic of the genre-hopping that the singer would explore his whole life. It has been said that in adding folk and country to his repertoire, Darin merely frustrated an audience who was eager to only hear "Mack the Knife" and similar pursuits. But in hindsight it's hard to fault Darin extending his reach, simply because he was so damn good at it, and better at it than just about anyone else (remember Sinatra's disco album?)

Aces Back To Back is the rare collection that works well as an introduction while satisfying eager fans who are looking for rare unreleased material. It isn't much of a retrospective, nor does it claim to be. At one disc it's much too short, and focuses almost exclusively on the latter half of his career, specifically, "live" recordings from his television show in the early seventies. The orchestra has a distinct Vegas feel to it and, this being the seventies, is updated with electric bass and guitar which only sounds dated today. But Darin was still in fine form, displaying a deep rich voice with perfect tone and unyielding presence on material as diverse as cocktail lounge material like "Beyond the Sea" to the hippie folk of "A Simple Song of Freedom." And while a cover of "If I Were A Carpenter" is more Bobby Goldsboro than Bobby Darin and a version of "Song Sung Blue" adds nothing new, they are still successful interpretations.

Also featured on the disc are a handful of country recordings that are unexpectedly appealing, like the beatnik shuffle of "Jive" and the quiet, gentlemanly "Rainin'." Also here are the legendary Milk Recordings, a series of songs Darin recorded backed by a jazz band. While the thought of having Darin run through a few jazz numbers is intriguing, all three songs are relatively brief, under five minutes total. Still, they are interesting to hear and collectors will be glad to have them.

Of course we get a version of "Mack The Knife," a swinging treatment from the television show performed with Rat Pack gusto and an enthusiasm that suggests that Darin never grew tired of it. Dick Clark thought he was crazy for recording it, but Darin took the gruesome lyric and transformed it into a pop classic that still retained its power almost a decade later. The CD closes with a quietly graceful version of "The Curtain Falls." All in all, a collection of tunes that represents the talents and range of a true star.

The bonus DVD contains the television footage of the first few songs on the CD. All have the fuzzy glow of early seventies variety shows, yet it's a hoot to watch Darin work the crowd, a true showman with an odd shuffling dance of his that is one part James Brown and two parts Jimmy Stewart. If you really like sideburns, you might watch these performances more than once, but with the music already on the CD, the real treat will be the recently uncovered documentary footage. Here we see Darin in a patchwork of live performances, interviews, and studio work that while not of the best quality, nevertheless gives us a glimpse into his work methods.

The only complaint is that the liner notes are woefully skimpy when it comes to information on the recordings themselves, instead featuring essays that shed little light on the artist. But fortunately the music is the important thing. Aces Back To Back successfully captures some of the missing and underrepresented chapters in Darin's career, a fitting tribute to an artist whose genius is still being discovered by many.

Bobby Darin (vocals, piano, drums, guitar) and many various others