BY DOUG COLLETTE
January 17, 2015
Sign in to view read count 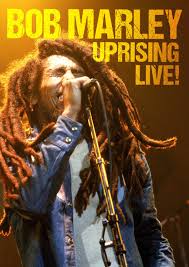 Given Bob Marley's status as a cultural icon, it only makes sense that it's impossible not to engage in the truisms of 'what if' and/or 'if only' watching Uprising Live! By the time of his untimely death from cancer in May of 1981, the Jamaican musician had achieved almost as much politically as artistically in his relatively short career span.

Marley was already ill and under treatment at the time of this appearance on the German television series Rockpalast, yet apart from a few off-key notes in his vocal on the penultimate tune "Coming in From the Cold," (as likely due to fatigue from the show as anything), there's little sign of impairment, no doubt a combination of his own spiritual faith, the obvious adoration of the audience and the solidarity of this lineup of Wailers (duly introduced by the leader at the finale). Ian McCann's essay in the enclosed booklet, well-intentioned as it is in its play-by-play seasoned with historical perspective, reads much like the package graphics appear: merely an approximation of the actual experience in its natural theater and almost indiscernible cumulative musical momentum.

Which is all the more remarkable even though little extended improvisation takes place on tunes both familiar ("I Shot the Sheriff") and comparatively less so ("Zion Train"). Still the segue from the dramatic half-spoken "War"/"No More Trouble" directly into "Zimbabwe" finds the frontman doffing his own electric guitar for the freedom of movement to move in time to his own music as he sings and dance during, appropriately enough, "Jamming."

To say Bob Marley and his band are immersed in their performance understates their almost trance-like focus on their singing and playing: the deep rhythmic groove implanted by charter members of the group, bassist Aston "Family Man" Barrett and percussionist Carl "Carly" Barrett, is mesmerizing, all the more so as seasoned by the percussion of Alvin"Seeco" Patterson" and even more so, dappled in the color of a double guitar (Junior Murvin and Al Anderson) and keyboard (Tyrone Downie and Earl "Wire" Lindo) alignment.

That said, the audio quality lacks a depth that would elevate its visceral impact. Admirable as it is for Bob Marley's estate to restore the visual quality of the decades old footage, the curiously random inclusion of program identifiers as on the original broadcast is distracting. Still, those insertions can't interrupt the flow of the show as captured in smooth camera work that highlights the participation of the entire ensemble, including the vocalists known as the I Threes: Marcia Griffiths, Judy Mowatt and Rita Marley had introduced the performance in the manner of an r&b revue the likes of which reggae musicians like Marley had so admired in their formative days.

And there's a knowing showmanship within the performance as it leads to an extended encore comprised of the acoustic (almost) solo rendition of "Redemption Song," then, inexorably, into the more anthemic likes of "Get Up Stand Up" and "Lively Up Yourself." Although Uprising Live! isn't up to the high standards of previously-released archive titles from the reggae legend, it does clearly document that that, if Bob Marley's ultimate goal was to unite on a global scale, performances such as this illustrate how he was able to achieve such ends at least in the more narrowly circumscribed context of his live presentation.