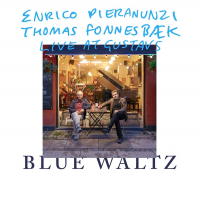 The best thing about a live recording is that it captures music made in the moment at a particular time and place. Indeed, when Italian pianist, Enrico Pieranunzi and Danish bassist, Thomas Fonnesbæk teamed up for two evenings of live recording at Gustav's Bistro, nobody could know how special it would be. In fact, Pieranunzi had played at Gustav's before and connoisseurs of Copenhagen Jazz Festival would know that the restaurant was a special spot for hearing music in tandem with tasty dishes and generous glasses of wine. Of course, eating took place before the concert and when the music started, the spirit was ready to be lifted.

It's no wonder that Pieranunzi liked the concept. A gourmet as well as a gifted pianist, Pieranunzi has previously recorded live at a winery and the result, Wine and Waltzes: Live at Bastianich Winery (Cam Jazz), was released in 2018, the same year as Blue Waltz -Live at Gustavs. Whereas the former catches Pieranunzi playing solo, the latter is a conversation between two masterful musicians. It's no coincidence that Pieranunzi has dubbed Thomas Fonnesbæk a "national treasure." Sometimes compared to Danish bassist Niels-Henning Ørsted Pedersen, Fonnesbæk plays with natural musical virtuosity and a nimble touch that makes the heavy instrument dance with elastic elegance and warm woody notes.

Naturally, Pieranunzi, a virtuoso himself, would appreciate the technical acumen of Fonnesbæk, but the real wonder of the concert is how technique is used to make the music speak in long, flowing sentences, surprising turnarounds, perfect pauses and precise punctuations. Their technical surplus could have turned into swaggering braggadocio, but instead it is used to ease the conversation as the two musicians finish each other's sentences. The title track is a fine example of how a slow waltz evolves into fast-paced lyricism. It's almost as if Pieranunzi can't help himself and the music carries him away on a fast run, but Fonnesbæk follows and suddenly the roles change. It is, to quote another tune, "Tales from the Unexpected." Nobody is locked in a fixed position and the music sings with unpredictable passion, and yet it has a crystalline, logical coherence that makes it a joy to follow the ride.

As it turned out, the concert at Gustav's would mark the end of music at the bistro. Gustav's is now closed, and the music has stopped, but it lives on elsewhere and on this disc. A very special moment captured live.