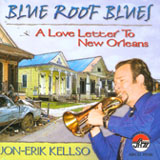 Jon-Erik Kellso is much like Ruby Braff in some ways: playing cornet rather than trumpet, with a very personal sound and an affinity for earlier musical styles like classic jazz and swing. He also recorded as a sideman with Braff and appeared on numerous record dates with traditional, swing or mainstream bands led by Ralph Sutton, Dan Barrett, Bob Wilber, James Dapogny and others.

But unlike Braff, Kellso is very easy to talk to and open to modern styles. His third CD for Arbors features the superb clarinetist Evan Christopher, guitarist/banjo player Matt Munisteri, bassist Danton Boller and drummer Marion Felder true to form on their arrangements of vintage jazz compositions like "Panama and Jelly Roll Morton's "Why, and swinging like mad in once-popular ditties like "Hindustan.

But they have surprises in store, too. The sassy take of Thelonious Monk's "Bye-Ya relocates bop to a funky New Orleans street parade, with the leader's gritty cornet complemented by Christopher's Pee Wee Russell-like clarinet and a bit of humor from Munisteri's dissonant banjo. Duke Ellington's "Way Way Back is a real obscurity, never recorded by its composer but solely by his tenor saxophonist Paul Gonsalves with fellow Ellingtonian Johnny Hodges for a small group date. This extended workout alternates between Kellso's expressive muted horn and Christopher's New Orleans-flavored clarinet.