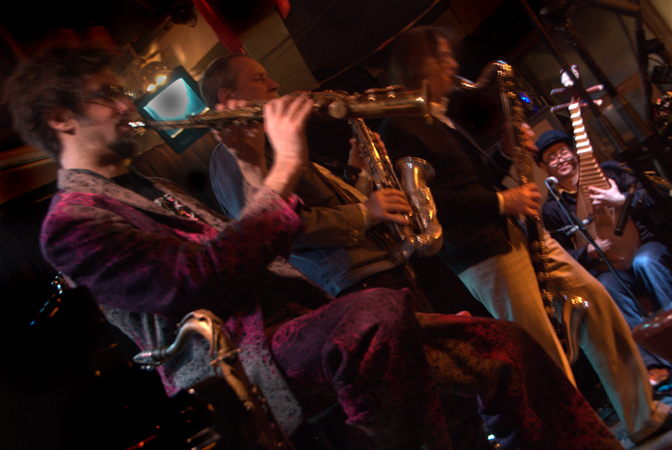 JZ Club welcomed a special evening with free jazz group Blue Koi Collective on Monday night. Led by Italian pianist Gabriele Meirano, Blue Koi Collective has been playing at JZ Club for the past two years, performing their unique rendition of "free jazz" with stalwarts Alec Haavik on saxophone and Feng Hao on percussion, along with various special guests. Featured guest of the evening was Li Daiguo, an eclectic musician and vocalist from Chengdu who has a grab bag full of instruments including the viola, kalimba, pipa, jawharp, and guanzi, not to mention spine-tingling throat singing skills and the occasional beatbox. Li's classically trained in both Chinese (pipa, erhu) and Western (violin, viola) tradition. For the second set, additional guests were Christian Kyhl on alto and sopranino saxophone and djembe, Peter Van De Locht on bass clarinet, and Robbie Melville on guitar.

The night began with a throaty introduction by Li against the backdrop of Meirano's slow piano melody. The low growl of throat singing rang through JZ Club and some patrons seemed slightly disconcerted—had they stumbled into a Tibetan temple on their way to a jazz club? But the unexpected is to be expected when the chalkboard sign beside the door promises free jazz, or as Meirano likes to call it, free improv. Sounds, neither discordant nor harmonic (you'd think it'd have to be one or the other), navigated the smoke-filled room amongst the audience's staccato conversation. There was an in-between-ness to the music. Haavik's soprano sax flitted in the spaces between Meirano's delicate piano, Li's eclectic instrumentals and Feng Hao's muted percussion. 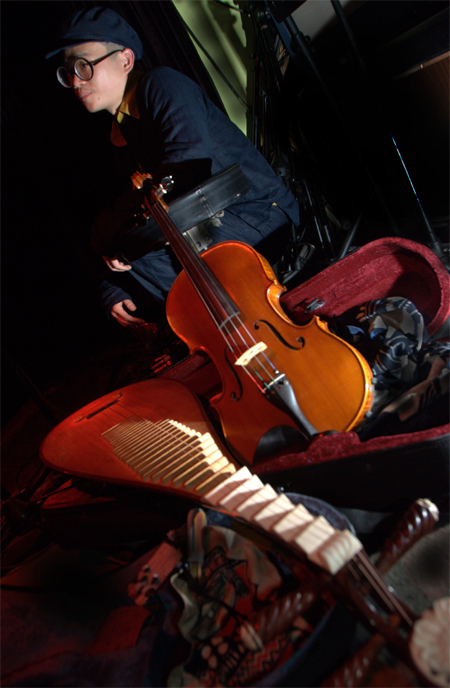 Music like free jazz takes either active or passive audience participation. You're either going to sit quietly and let yourself be pulled into the world of the musicians' creation, or staunchly ignore it. Half-ignoring free jazz is a difficult task; it does not the ideal background music make. Not at all that well-versed in the free jazz arena, I expected to negotiate a battery of extreme sounds, but instead, I found myself entranced.

Li's pulled out a viola and he's picked up where the rhythm section has left off, leading the band into a fevered crescendo. The insistence of Feng's unpredictable rhythms could not be ignored, along with his thunder tube and other percussive contraptions. Li's erhu-sounding viola melded with Haavik's tenor sax, while his overtone/polyphonic singing brought an eerie quality a la David Sykes that I haven't heard in a long time, especially not in jazz. The randomness on stage offered an unrestrained passion that more controlled performances lack, riding a fine line between freedom and anarchy.

For the second song, Feng began with a gong straight out of a Chinese opera and Li plucked a pipa in time. Haavik pulled out his Moog Liberation, a small red keytar that looked even more diminutive next to Haavik's towering stature. The Chinese influence contrasted with Meirano's distinctively Western piano sounds. Li's pipa was magical, the strings offering a single clear voice that rose above the rhythm section. Haavik added an eerie touch with X-Files-esque electronic notes. 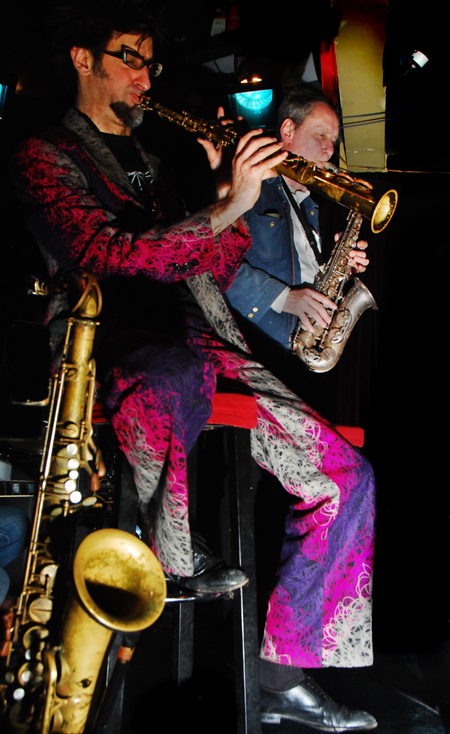 The lurking danger of 'noise' that can sometimes accompany free jazz felt faraway tonight. The musicians built beautifully off of one another, with the restraint that allowed each instrument the space to breathe. Li's vocals proved mesmerizing every time they wound their way to the forefront. Another chant closed the first set.

The second set featured special guest Christian Kyhl on alto saxophone, who kicked off before the other players were even onstage. Back in the day, Kyhl played alto and soprano saxophone and triangle on John Tchicai's Afrodisiaca (Promising Music/MPS, 1969). Other than Kyhl, the Collective is joined by Robbie Melville on guitar. All about the extreme sounds, the alto saxophone reaches another level, inspiring the rhythm section to join in, gently at first, then inner animals were unleashed and the stage erupted in a bold symphony. Meirano's piano was unobtrusive, non-egotistical and thematically potent. Some drunk Japanese dude decided to join into the musical orgy by conducting the band from the front of the stage, creeping and reaching closer and closer in an alarming manner. Security?! Kyhl and Haavik launched into a flurry of woodwinds that stoked the audience into an uproar.

Melville's thoughtful guitar was more audible in the second song of the second set, accented by Kyhl's djembe and Li's beatbox, jawharp, and pipa. I reveled in the subtle call and response betwixt the instruments, the unexpected harmonies, and the overall freedom of sound. Meirano constantly grounded his fellow musicians with his keys, bringing harmony that's even sweeter after such freedom. Ears seek harmony, spirits seek change; the combination brings contrast and color to paint the world anew. At moments, the piano possessed strength and surety, showing that Meirano, too, could take center stage when he chose. 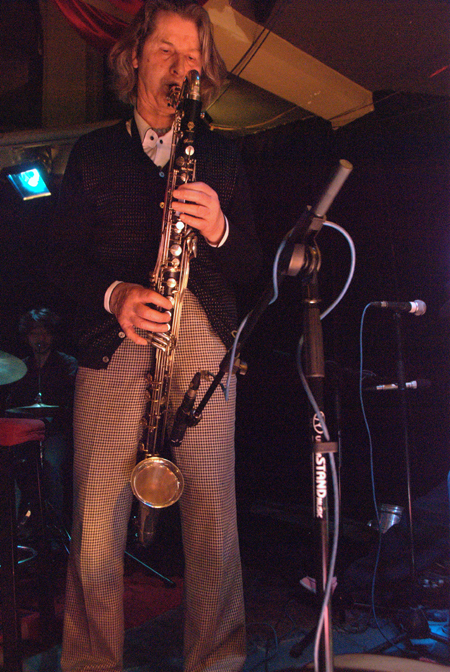 Van De Locht and his bass clarinet were brought on for the third set of the night. As soon as all the players were on stage, another woodwind storm rose. Li threw down a bit of throat singing for juxtaposition.

Van De Locht and Kyhl together presented a high-pitched and downright avian mix of sounds that was underlined by Haavik's grounded tenor saxophone. The bass clarinet, with its ability to go from low to high in 0.6 seconds, isn't an instrument you see very often and Peter V played it with fervor. Haavik, always lyrical, provided melody amongst chaos. In the end, Li whipped out another special little instrument, a guanzi (a small Chinese flute). I left JZ Club heady from sound overload and happy to have heard a host of fascinating instruments played by a group of musicians who are not afraid to use them.