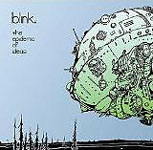 Although it's a record on which three adventurous London musicians each contribute to making the earth move, Blink may one day be best remembered as the album with which pianist Alcyona Mick started getting taken very seriously indeed.

Still in her mid-twenties, Mick is a jazz player whose style is enriched by her love of contemporary classical music. Here, she reveals herself as a composer and improviser who has absorbed her diverse early influences—amongst them Thelonious Monk, Lennie Tristano, Bela Bartok and Olivier Messiaen—learnt from them, moved on from them, and found her own distinctive voice. The expectations raised by her debut album, Around The Sun (Audio-B, 2006), recorded in 2004 when she was still a student at The Royal Academy of Music, are fulfilled completely and irresistibly. It may sound a little breathless to say this, but hey...with Blink a new star is amongst us.

Blink the trio has been around for two years. Tenor saxophonist and clarinetist Robin Fincker is co-leader of the two-tenor quartet Outhouse—whose own debut, Outhouse (Babel, 2008), is creating another local stir (Outhouse's other tenor player, Mark Hanslip, was a member of the sextet that recorded Around The Sun). Drummer Paul Clarvis, whose credits are encyclopedic, is probably best known as leader of the beguiling world-jazz chamber group Orqestra Mahatma.

Mick wrote six of the tunes on Blink, which also includes three by Fincker and a cover of contemporary classical composer Harrison Birtwistle's "Berceuse de Jeanne." Mick's pieces are things of wonder—"Quiet Afternoon," "The Gulf" and "Long Forgotten To You" are as ravishingly beautiful as Birtwistle's uncharacteristically lyrical little gem, and as quirky and full of unexpected (but just right) harmonic and rhythmic twists and turns as anything that delightful British eccentric has written. Her light-fingered but vibrant two-handed improvisations, meanwhile, particularly on the robust "Ronnie" and "Something Like The Blues," reach levels of other-worldly intensity not unlike those heard in Benjamin Britten's orchestral works.

Clarvis and Fincker are brilliantly empathetic colleagues. Fincker's tenor is questing and febrile, his clarinet trippy. Clarvis' drumming is filigreed or fat as appropriate. The absence of a bass frees up the relationships between the players. Everything, even the collectively improvised sections which follow (and in some cases precede) theme statements and individual solos, is shot through with warmth and melodicism.

Blink will entrance and excite in equal measure. Whatever you do, don't miss it.

Camoodi; Berceuse de Jeanne; Ronnie; The Bar; Quiet Afternoon; Tin Box; The Gulf; Something Like The Blues; Long Forgotten To You; The Mess.