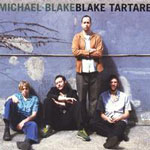 Why Michael Blake has had such a tough go of finding ways to get his music out to the public is an interesting issue, and unfortunately not such an uncommon one. Coming out of John Lurie's Lounge Lizards and consistently involved in the Jazz Composers Collective (along with Ben Allison, Frank Kimbrough, Ted Nash, et al.), Blake's distinctive vision and voice on soprano and tenor should have long ago sealed a consistent stream of music from him. His last recording under his own name, Elevated, made numerous top ten lists, just as his other recordings have garnered critical acclaim. A couple of years down the road, Blake created his own means by self-producing Blake Tartare.

Featuring a group filled out by a trio of musicians from Denmark with whom Blake developed a strong report in 2001, Blake Tartare is comprised of his own compositions as well as covers of Mingus' "Meditation and Sun Ra's "Languidity, with a distinct and open contemporary sound. Of the new faces here, drummer Kresten Osgood is one to keep an eye on. A former student of Ed Thigpen, Osgood is pushed to the forefront of the recording and is consistently a confident and burgeoning individual voice. He employs a variety of techniques from the classic rudiments to mimicking contemporary beats, a technique employed beautifully on "Feast.

"Cuban Sandwich is a prime example of the group's talent at creating an interesting texture in only two and a half minutes. Blake leads in with a line that is distilled into a repeating motif that goes from lead voice to backing instrumentation as the piano takes the forefront. No one solos in the traditional sense, but together they build momentum, capped by a recapitulation of the opening of the song.

This leads into the aforementioned "Feast, where guitarist Teddy Kumpel joins the group. The piece includes similar developmental elements; Osgood lays a groove that receives a good workout by both Blake and Kumpel, whose "lap steel from down the hall" sound is an attention-grabbing addition. His solo builds over time, and when it reaches a crescendo, the bottom end falls out as Blake is heard playing a kalimba underneath. The song evolves in such a way that if you tuned in only halfway through, you would be hard-pressed to say who was the leader, or even if it wasn't a contemporary electronic record. Throughout, Blake's individualized voice is a pleasure to hear. From breathy tenor tones to multi-horn gymnastics, he comes out of the tradition yet sounds unique in a modern context, far removed from the majority of saxophonists playing today.

Blake had been shopping Blake Tartare around and finally decided to publish it himself in 2004. It's nice to see that good music finds a way to be heard, since Stunt Records has picked the album up and has reissued it. What's even better is the group will have a new release before the end of the year as well.