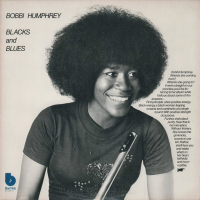 The title of the album and that of its opening track ("Chicago, Damn"), the original release date (1973) and the 'fro might suggest flautist Bobbi Humphrey's Blacks And Blues came with a clenched-fist salute and a political manifesto. But hey, Humphrey's third Blue Note release was composed and produced in La La Land by brothers Fonce and Larry Mizell, masters of chilled-out jazz-funk. Humphrey's cover-shot smile is the real clue to the vibe of the album—which in 2019 has been given an all-analog remaster and reissued on 180g vinyl as part of Blue Note's 80 Vinyl Edition series.

Straight-ahead jazz fans hated Blacks And Blues when it first came out. It represented everything they loathed about Blue Note's direction following its sale to United Artists and the subsequent retirement of label founder Alfred Lion. Following the passing in 1971 of Francis Wolff, the sole survivor of the original regime, UA brought George Butler in to helm the label, with a brief to reach out to the pop and funk worlds and reverse a precipitous decline in sales. Some dreck besmirching Blue Note's reputation certainly followed. But there was good stuff too and, on its own terms, Blacks And Blues was a winner. The strongest tracks are the openers, "Chicago, Damn" and "Harlem River Drive," but the mellifluous groove is maintained throughout, anchored by Harvey Mason's drums and Chuck Rainey's Fender bass. When the sun is out and the living feels easy, the album hits the spot as sure as a line of Colombia's finest did back in the day.

Such was the success of Blacks And Blues that Butler teamed Humphrey up with the Mizells for the follow-ups Satin Doll (1974) and Fancy Dancer (1975). Both albums kept things on the good foot, but Blacks And Blues was the stone killer. Blue Note has chosen the right album for reissue.