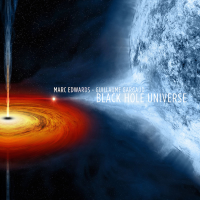 Black holes are giant space predators—devouring light itself. Theory holds that, as one approaches a black hole's event horizon, time itself slows. So it is interesting that on their album Black Hole Universe, drummer Marc Edwards and guitarist Guillaume Gargaud have chosen to create five diverse yet similar spontaneous compositions which jettison time signatures and conventional rhythms to focus on a dark madness that evokes both the emptiness of space and the fluidity of existence itself.

In his essays, the "radical for his day" composer Charles Ives asked: "Whence cometh the wonder of the moment? From sources we know not. But we do know that from obscurity and from this higher Orpheus comes measures of sphere melodies, flowing in wild, native tones, ravaging the souls of men, flowing now with thousand-fold accompaniments and rich symphonies through all our hearts, modulating and divinely leading them."

Perhaps Edwards and Gargaud are expressing Ive's "wonder of the moment." But if this is so, then it is a moment in which no quarter will be given. Like being trapped in a falling elevator with no escape, this music induces sheer terrifying exhilaration. Demonic roller coaster? Coiled rattlesnake? Charging rhino? Or simply sonic experiments in space-time jazz?

Like the protagonist in Aronofsky's movie Pi, the listener is confronted with a musical enigma pointing to a future that is both alienating and terrifying. To some, this music might appear deceptively simple —musicians making noise. But given the technical virtuosity of the duo, nothing could be further from the truth. One can hear a mix of Jimi Hendrix meets Robert Fripp in Gargaud's efforts while Edwards sounds like Edwards—a drummer who exhibits a knack for musical nuance while employing preposterously powerful attacks.

For an introduction to the world created by the duo, one might start with "Electrical Acoustic Synapses." The piece begins with an Edwards hot all over drum solo, which flows out of him so naturally, it's as if body convulsions had turned into drum technique. Gargaud enters with long abstract chords and howling rips, supported by Edwards' powerful strokes. At a certain point, Edwards adopts a bumpy rhythm that hops and lands like some chasing space monster while Gargaud's frenzied playing makes the chase seem all too real. Eventually Gargaud's notes turns into one long extended howl—uniquely expressive—while Edwards rampages like a charging stampede of water buffalo. The piece ends on an extended guitar note.

On "Volcanic Eruptions On Lo," there's an engaging rawness between guitar and drums, even at such a high level of technical brilliance. Edwards' cymbal splashes and all over drumming provide a perfect foundation for the guitarist's blinding runs. The music suggests an angry ocean, with waves that dash and fall apart against rocks that tower to the sky. Towards the end, Gargaud produces an almost-violin sound with his guitar.

The relentless intensity continues on the title cut, "Black Hole Universe." Gargaud races like an extended sprint over a marathon's worth of music. The notes turn into a raging river—bucking across Class V rapids at accelerated speeds. Edwards drumming is always supportive of these efforts and occasionally rises to lead the charge. Only on "Supernova Aftermath" is there a break from the action. Yet this piece features subtle eerie echoes, like a surface devoid of life. Edwards uses bells for effect and Gargaud adopts an acoustic tone. The chords are dark and mysterious. There's a gentle feeling— Edwards tapping lightly on the drums with brushes while Gargaud explores growls and bristles at times and then suddenly leaps out. The piece dies off with a soft roar.

Mind bending, mind warping and mind altering, the music of Black Hole Universe has a cyberpunk jazz vibe—like basement music where beings collide like atoms in massive mosh pits. It may be best to approach this music with blinders on, a horse traversing a busy intersection. Else panic might ensue.