According to drummer Bill Bruford, the year 1987 was considered something of a fence constructed in the middle of his career—the year where he, at least from the perspective of his own work, stopped being considered a rock drummer (albeit a progressive one at that) and became a jazz drummer. With the formation of the first of his Earthworks bands, Bruford apparently walked away from "all guitars and electric" towards "all saxophones and acoustic." That this artifice exists at all is really only the result of some folks' need to pigeon-hole an artist, as Bruford's work has always existed along a clear continuum.

The reality is that, while Bruford's material began to take on something of a jazzier complexion, the line from '70s releases including Feels Good to Me and One of a Kind to Earthworks Mark I in '87 is, in fact, a straight and uninterrupted one. The instrumentation may have changed, but compositionally and stylistically it's impossible not to recognize the two periods as coming from the same artist. And that, is what defines an artist with a vision—one, to be sure, that evolves and expands over the years.

There is no question that by the time Earthworks Mark I emerged, Bruford's playing style, which incorporated mind-bending irregular meters and polyrhythms in ways that always seemed to groove magically—sometimes almost despite their inherent complexity—had loosened up considerably. But this loosening up was a gradual thing; his early '80s duet recordings with keyboardist Patrick Moraz demonstrated an increased interest in free interplay and a less mathematically-rigid approach. But it was with Earthworks Mark I that Bruford began to be accepted, on a broader level, as a jazz drummer, even though roots in the style go right back to his formative years. Maybe it's because some of their music actually swung and it was clear that, in saxophonist Iain Ballamy and horn player/keyboardist Django Bates, Bruford had found players who were clearly familiar with the jazz tradition, even as they pursued ways to break it down and reconstruct it in new and unusual ways.

And so today, Bruford continues with his reissue series, releasing remastered and expanded editions of Earthworks Mark I's first two releases,'87's Earthworks and '89s Dig? on his relatively-recent Summerfold imprint, where he is gradually reissuing all of his post-'87 work, along with new releases from his current Earthworks band and other projects including his duet work with Dutch pianist Michiel Borstlap. This, as contrasted to his Winterfold label, which is handling much-needed remastered editions of his solo work from prior to that seemingly watershed year. The Summerfold remasters of the Earthworks Mark I material are characterized by improved sonics, and bonus live tracks that provide insight into just how much Earthworks was (and is) an improvising band. Also included is a bonus Winterfold sampler disc, to introduce listeners to Bruford's pre-Earthworks solo material. 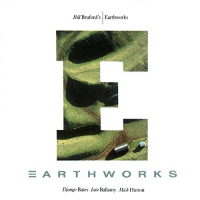 The first release of Earthworks Mark I, in addition to Ballamy and Bates—two relatively unknown artists at the time who would go on to forge their own significant careers—also featured acoustic bassist Mick Hutton, a player with a huge sound that reached deep into the gut. That the album was co-produced by Bruford and keyboardist Dave Stewart who, in addition to working in a number of seminal British progressive bands including Egg, Hatfield and the North and National Health, was also a member of Bruford's late-'70s band, Bruford, means that the link between Bruford's earlier efforts and this new collective is clear and unassailable. The textures may have differed, and the conception a new one, but it was also a clear evolution rather than something starting from nothing.

In fact, Earthworks Mark I really are the logical link between Bruford's '70s work and his acoustic Earthworks Mark II, that emerged in the late '90s. Bates was as apt to be found playing electric keys as much as his tenor horn and trumpet, and Bruford had been working with electronic drums in addition to his acoustic kit—developing a system called chordal drums, which allowed him to trigger keyboard sounds and sequences from his kit. One of the most invigorating things about watching this version of Earthworks live was to see how seamlessly Bruford managed to create keyboard patterns beneath the music, all the while building more expected—but hardly conventional—rhythms from his acoustic kit.

Looking back, Earthworks is the most approachable of Earthworks Mark I's four releases. With the exception of the atmospheric "The Shepherd is Eternal," which leads into "Bridge of Inhibition," a piece revolving around a frenetic and complicated theme that acts as a jumping-off point for free improvisation, and a highlight of their live performances at the time, the compositions are all firmly-based in form. But that doesn't mean the tunes—composed by Bruford, Ballamy and Bates, sometimes alone, other times in combination—are simple theme-solo-theme constructs. Bruford's attraction to the juncture of strict form and freer improvisation, took a giant leap forward with Earthworks.

Songs often have movements; "Making a Song and Dance" begins with a 15/8 groove that is almost Latin-inflected, but abruptly changes pace half-way through into a funkier 4/4 section over which Ballamy stretches. "Pressure" may begin with an idiosyncratically-metered frenzy, but it's really a blues in disguise, that is, until the middle section, which starts darkly, but gradually moves into the light with a lithely-swinging solo section for Bates on piano. Like other tunes on the album, this track truly reconciles Bruford's interest in compositional constructs and a more relaxed approach to improvisation. It also finds the meeting point between Bruford's more progressive rock leanings and a deeper understanding of the jazz tradition.

Elsewhere, on "My Heart Declares a Holiday"—which would ultimately be covered by Earthworks Mark II on Random Acts of Happiness—Bruford triggers an alternating 6/4 and 7/4 keyboard pattern that changes harmonic complexion based on Hutton's bass line. Bates' "It Needn't End in Tears" in some ways resembles Joe Zawinul's Weather Report ballad, "A Remark You Made"; tender and understated.

The bonus tracks are live versions of "A Stone's Throw" and "All Heaven Broke Loose," with bassist Tim Harries replacing Hutton, who left the group after the first record. Clocking in at over 17 minutes, these beautifully-recorded live tracks support the truth that Earthworks was unquestionably an improvising band; more than just a soloist playing over a fixed rhythm section, Earthworks has always been a looser affair, as much about interplay as adhering to any compositional form. 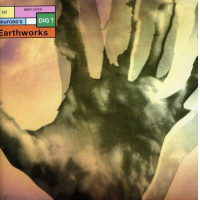 With the release of Earthworks Mark I's second album, Dig?, the group began to consolidate its sound and further forge its own identity. One of the notable characteristics of the group was a certain tongue-in-cheek absurdity, with self-reference also fair game; the opening track, "Stromboli Kicks" briefly alludes to the last track on Earthworks, "Bridge of Inhibition" before heading into altogether more funky and accessible territory.

Bruford's chordal drumming is even more tightly integrated; so much so that it is often difficult to determine whether a keyboard sequence is being played by Bates or Bruford. And with Harries replacing Hutton in the line-up, textures are broadened even further, Harries being equally comfortable on electric fretless bass as on acoustic.

While Dig? is by no means unapproachable, it finds the group moving even more into exploratory territory. Earthworks may have introduced a jazzier Bruford, but there were still certain inexorable ties to the fusion of late-'70s Bruford. With Dig? the group moves farther afield. Likely a result of the growing confidence that comes from having some history together, the group's interplay is even more vivid. The delicate "Pilgrim's Way" may be centred around Bruford's arranged chordal drums, but Bates, Ballamy and Harries feel more relaxed and playful. That "A Stone's Throw" is the most contemporary of jazz is unquestionable, with a more advanced harmonic construction indicative of the whole set and, once again, demonstrating Bruford's increasingly relaxed approach to the kit. Still capable of staggering polyrhythmic displays, Bruford was, by this time, becoming more and more comfortable in a role that saw him an equal improvisational contributor to the proceedings, rather than a complex timekeeper.

Elsewhere, complex composition, but with a more abstract edge, abounds. Bates' "Dancing on Frith Street" does settle into a steady, albeit irregular-metered groove for Ballamy's soprano solo, but it navigates through a variety of episodic territories to get there. And there's more overt abstraction too; "Corroboree" is indicative of a group comfortable enough with each other to take the risks without a safety net. Ultimately resolving into a more composed form, the piece begins as a purely free improvisation

Once again the bonus tracks—live versions of "Emotional Shirt" and "Pigalle" show that Earthworks was, as much one that took advantage of the tools of the studio, truly an in-the-moment band, taking their material to a different place on the concert stage.

Perhaps less eminently approachable than Earthworks, but equally compelling in its own right, Dig? finds the group moving farther into its own distinctive milieu, one that would be further explored, both in the studio with their next release, All Heaven Broke Loose, and on the concert stage with their final release Stamping Ground Live. All Heaven Broke Loose and Stamping Ground Live are to be reissued in the coming months on Summerfold, and will be covered in a future article.