BY EYAL HAREUVENI
November 27, 2013
Sign in to view read count 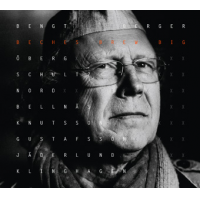 Swedish master drummer and bandleader Bengt Berger calls his own label Country & Eastern, a title that suggests a fresh mix of new modes of expression and impulses from some of the great musical traditions of the world. Berger claims that this label provides the best Al Dente music, and when it comes to his nine-piece Beches Brew BIG, an obvious reference to Miles Davis' Bitches Brew (Columbia, 1970), he is absolutely right.

The Beches Brew Big is a deeper and powerful extension of the Beches Brew quintet who released its debut in 2010 (Country & Eastern). Both versions of this band serve as a vehicle for Berger—who studied the Hindustani, Karnatic and West African musical traditions and collaborated frequently with Jonas Knutsson, keyboard player Mats Öberg and banjo players and guitarists Goran Klinghagen and Max Schultz.

Knutsson's deep emotional solo on "Over The Hill" spirals the original theme to a beautiful climax. Klinghagen, violinist Livet Nord and saxophonist Thomas Gustafsson lead us through a mysterious journey in East-Asian scenery on "Penye Gahu," setting an infectious vamp for the ironic "Seven Stops to Heaven" (a play on Miles Davis' "Seven Steps to Heaven}} that is intensified on the following, fast eruption of "Metapolka."

"Djupet" (Deep) is a dramatic staging of a text of William Shakespeare, narrated by Livet, accompanied by a bass clarinet by Sir Thomas Jäderlund that stresses the dramatic atmosphere. The band makes a short and equally dramatic tour in a Balkan modes on "Pizza Express" before closing the concert with two favorites. "Edith," with guest vocalist Jenny Gustafsson, is an excellent demonstration of Berger swinging hard and alternating between rhythms, and the folk dance "Morfars Schottis," to the words of Mats Nörklit (this composition was recorded on Bengt Berger Old School's All Time high, Amigo, 1999).

Berger offers eight additional, digital-only pieces on Beches Brew BAG ("for fanatics only") that include other pieces and alternate takes from the same concerts. These pieces include the bluegrass meets jazz meets Indian "Dr. Apa," another moving version of "Over the Hill," the delicate drama of "Eight Fortyfive A.M" and the festive "Happy Hindu." There is a agood chance that anyone who experienced this great band will become a fanatic.