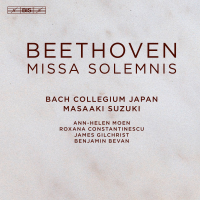 It's almost certain that there is a Baroque Music User's Manual issued to each new period-instrument/performance orchestra and conductor defining what pieces of music must be recorded. De rigueur are all of Johann Sebastian Bach's Orchestral Work and Choral Works, including complete Cantata Cycles like those recently completed by John Eliot Gardner with his English Baroque Soloists and Monteverdi Choir and Masaaki Suzuki and the Bach Collegium Japan. Nikolaus Harnoncourt, Christopher Hogwood, Roger Norrington, William Christie, Phillippe Herreweghe—and the list does not end—have all made their mark on the recorded Baroque repertoire.

Generally, these guys start with Bach, add Monteverdi and, sometimes Vivaldi, inching ever so closely to Mozart (particularly his Requiem and masses) and Haydn, and when they completely lose their minds they take on Beethoven. I am of two minds. On one hand, I believe that the modern orchestra had to evolve into the World War II-period Berlin Philharmonic to adequately address Beethoven's orchestral and choral music. That big sound with that big music was always impressive and necessary. When the period instrument/performance movement gained traction in the 1980s and '90s, it revealed the subtle nuances in Beethoven's music that betrayed hints of Haydn and Mozart before him, giving better picture to the master's evolution.

Early period-instrument recordings of Beethoven were often criticized for their thin and tinny sound, the result of the lack of necessary instrumental horsepower and the recording methods of the time. These shortcomings have been largely corrected as evidenced of Gardiner's re-addressing of Beethoven Symphonies with his Orchestre Revolutionnaire Et Romantique on Live At Carnegie Hall—Beethoven Symphonies 7 & 5 (Soli Deo Gloria, 2012) and Live At Cadogan Hall: Beethoven—Symphonies 2 & 8 (Soli Deo Gloria, 2014), the former of these being the first such recordings in 40 years to offer flight to the landmark 5th and 7th Symphonies provided by Carlos Kleiber and the Vienna Philharmonic Orchestra (Deutsche Gramophone, 1976).

That said, the matter at hand is the Beethoven composition that the composer felt was his greatest work, the titanic Missa Solemnis, Op. 123, 1824. Sprawling and shaggy, majestic and brilliant, the Missa Solemnis. To be sure, this is a work that requires a lot of horsepower itself. My introduction to this piece was Robert Shaw and the Atlanta Symphony Orchestra and Chorus' 1988 Telarc recording (coupled with Mozart's Mass in C Minor). This recording featured tenor John Aler in an over-the-top-performance. This recording was achieved with modern instruments and contemporary conducting practices. Most of the Baroque period-instrument conductors addressed Missa Solemnis, including Gardiner, who has recorded it twice, once with the Orchestre Revolutionnaire Et Romantique and Monteverdi Choir in 1990 on Arkhiv Produktions and again in 2013 with the same band and chorus for Soli Deo Gloria. The latter recorded live. Both of these recordings are exceptional and are joined late by Masaaki Suzuki and the Bach Collegium Japan's recording, making for some lively comparisons.

instrumentally speaking, Gardiner and Suzuki both summon the necessary gravitas from their orchestras, creating the most receptive environment for some of the most dramatic and solemn singing in the repertoire. Gardiner's second recording compares favorably with Suzuki's sweet and crisp performance over all. Suzuki's "Kyrie," the most powerful introduction in 1500 years of liturgical music is powerful, lush, propulsive, and acutely informed. The conductor summons the flagging spirt of the dying composer, infusing it with the majesty and power it deserves. Ditto for the "Gloria" and "Credo," both beautifully ornamented and expertly sung by the European soloists. The two sections of the "Sanctus" are imperial in their power and possessing a keen balance in dynamics (kudos, Maestro Suzuki). As shown in the Ninth Symphony finale, we know Beethoven knew how to wrap things up, and the same is true in the "Agnus Dei: Nona nobis pacem," where the composer reprises previous fragments. Suzuki and his Bach Collegium conjure grand spirits to finish up. The strings are tightly controlled and fully realized and captured. This is a splendid Missa Solemnis that makes this writer want to hear the symphonies by this fine band.