Freddy Cole: Because of You: Freddy Cole Sings Tony Bennett

By ANDREW ROWAN
December 10, 2006
Sign in to view read count 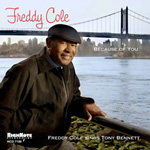 Confession, they say, is good for the soul. So this reviewer must confess to only a recent realization of Freddy Cole's extraordinary talent. Simply put, he knows how to do it; this tribute to another singer who gets it—Tony Bennett—is touching.

Cole's relaxed, bluesy approach, enhanced by those cracks in his voice, is perfect for "I Got Lost in Her Arms." And although Billie Holiday comes to mind first for "Getting Some Fun out of Life," there is no quibble with Cole's reading, shadowed by Houston Person's soulful tenor sax cries.

Key to this session too is arranger/pianist John DiMartino. His settings never call attention to themselves; they simply provide the perfect frame for Cole to tell his stories. Likewise, he offers self-effacing accompaniment that complements the singer and the band (catch what he plays under the singer's reprise on "Blame It on My Youth") and he shines when he steps out to solo.

The mood here is subdued, but swing rears its head beautifully on "Because of You." Unfortunately, this song highlights the session's one weakness: it is too much of the same thing—mood, tempo, routine—though expertly done. It misses the pop of his previous release, This Love of Mine (HighNote, 2005). It does though offer "All for You," Django Reinhardt's haunting "Nuages," outfitted with words (and a Latin rhythm), as well as the seldom-heard "What Are You Afraid Of?" and Louis Armstrong's "If We Never Meet Again." But, these pieces notwithstanding, the sense of surprise and whimsy in the previous session is missing.

When the discussion turns to his singing and his raw act of creation, Cole is virtually beyond reproach. Mellow and loving, he offers here a heartfelt tribute to the octogenarian Bennett, his compatriot in the noble art of popular song.

Getting Some Fun Out Of Life; Blame It On My Youth; Because Of You; All For You (Nuages); If I Ruled The World; What Are You Afraid Of?; You're My Thrill; I Got Lost In Her Arms; The Gentle Rain; If We Never Meet Again.