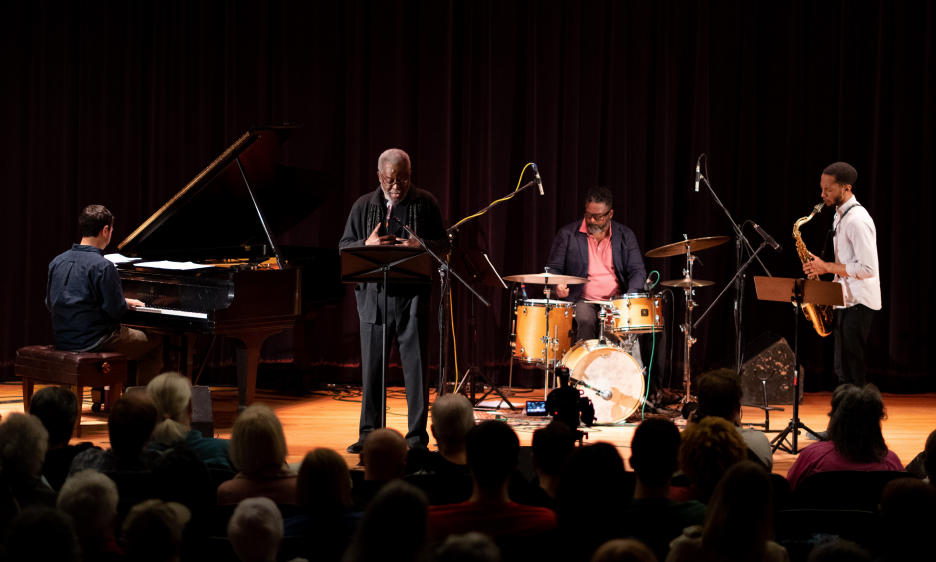 Detroit-based jazz fans have become well-acquainted with pianist Michael Malis and saxophonist Marcus Elliot, both of whom are fixtures among the up-and-coming generation of musicians in the city, playing in all kinds of configurations and in wide-ranging, cross-stylistic endeavors. As the duo Balance, they've worked together for several years, releasing a very promising self-titled CD back in 2017 that reveals the players' ability to navigate the boundaries between classical discipline and spirited jazz-based improvisation.

In 2018, they hatched the idea to team up with two other figures, both of whom are bona fide Detroit legends: drummer Gerald Cleaver, who no longer resides in the Motor City as he is typically found back east where he stays quite busy working with leading avant-gardists such as Craig Taborn, Ivo Perelman and William Parker; and from an even earlier generation, poet, playwright, and novelist Bill Harris, whose recent volume I Got to Keep Moving envisions a multi-generational African-American freedom saga that evokes the tragedy and triumphs within the transition from pre-Civil War America to the twentieth century through 25 interrelated stories.

Putting Harris's stories together with music, the quartet performed at three free concerts on three successive days from April 5-7, 2019. After shows at the Toledo Museum of Art on Friday and in Ann Arbor at the University of Michigan on Saturday, they finished up on Sunday at the Detroit Public Library in front of a near-capacity crowd in the Clara Stanton Jones Friends Auditorium. The resulting music was extraordinary—both in its artistic scope and its social relevance. As debates concerning the possibilities of reparations for slavery have once again arisen with force while the nation gears up for the 2020 election, Harris's potent recounting of the horrors of antebellum Alabama points to an aspect of the story that should serve as context for these discussions.

Before bringing Harris up on stage, Malis, Elliot and Cleaver stretched out on two ten-minute pieces: the first, one of Elliot's compositions entitled "August," epitomized the type of sound one finds on Balance: an expansive exploration of mood and texture, with a lyrical aspect augmented by Cleaver's malleable groove and animated by Malis's propulsive chords. The second piece was a more bop-oriented number penned by Lawrence Williams, "Number 4," with a much more overt sense of swing and rhythmic punch, giving Elliot a chance to dig in with a soulfully fluid solo. Both pieces were excellent, but the real highlight of the afternoon was yet to come as the band then turned to Harris's I Got to Keep Moving.

Harris's three stories featured in the concert are centered on a fictional Alabama plantation called Caledonia, set from the 1830s through the 1850s. The first, "That First Year the Business Was Wood," furnishes the context for the others, as it depicts the creation of the plantation itself, from the cutting of timber to the planting of cotton, and the brutality of forced labor at the heart of it all. Here Harris's text is especially expressive and poetic, with a rhythm to its language that Malis, Elliot and Cleaver could respond to and build upon. As Harris traced the myriad mind-numbing tasks and the oppressive drudgery of slaves' activities, the band surged, capturing the raw energy that drove this work forward. Periodically Harris would sit out while the band developed an idea, then return to sketch the next aspect of the story.

What was most striking about the synergy between Harris and the band was the sheer beauty of the music: the stark contrast between the grim realities of Harris's story and the band's melodic core, located in Elliot's exultant phrases and Malis's evocative runs, was stirring. And much of the music's strength was found in the spirit of resilience and defiance that permeates Harris's text: "Knowing that even the ground out of which their cotton, that gave them all their power over us, could be defeated and depleted—that fueled everything we did." By the end of the piece, the music barreling ahead with a barely-controlled intensity, the tempest eventually subsided when Harris defined the hopeful thread that ties the stories together, "inspired by our being as much trouble as we could while having the gumption and grit to keep on until the world reversed its course or somersaulted...so we could hold again without grasping, breathe again without panting, and get, grow, laugh unquestioned, wander, leave, have privacy, choose, be."

The last two pieces were just as affecting, albeit with different emotional registers. "Cretia's Gal" presents the story of a slave girl who is beaten and sold to another plantation as punishment for having played her mistress's piano; and "Eph" depicts a carpenter on the plantation who uses an ecstatic dance as an opportunity to envision the possibility of escape. The musicians created a haunting backdrop for "Cretia's Gal," with Cleaver's subtle mallets maintaining tension while Elliot's ostinato phrases soared over Malis's restrained, plaintive chords. But the band's full dynamic range was unleashed on "Eph," where the dancer's "spasms and jerks and contortions flowing together like torrents of water," given life through Harris's impatient, staccato delivery, were matched by the visceral intensity of the band—Cleaver's furious pummeling pushing the music to its limits before gradually retreating, settling back gently into the music's melancholy, elegiac finish.

What ultimately made this performance so effective was the integration of the four artists into a single musical whole. With its rhythmic energy and poetic power, Harris's text became another instrument, in essential interaction with the musicians, and at the same time capable of bringing so much meaning and truth into the music. It's a testament to Malis's and Elliot's restless ambition that they felt compelled to tackle a project of this significance, and its resounding success bodes well for the future of Detroit's forward-thinking jazz community.