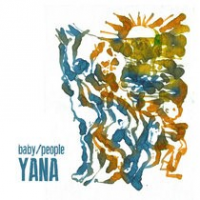 The trio Yana has, apparently, been together for more than a decade but this is their first CD release, other recordings being available on Bandcamp. Corey Mwamba is one of the most interesting and exciting vibraphonists currently working in jazz and improvised music. One might, with justification, call him a musical scientist whose concern is with the creation of edifices in sound. In this particular setting, he is well-matched by two exceptional young musicians in bassist Dave Kane and drummer Joshua Blackmore.

The music here is far-removed from the Sturm-und-Drang approach of some free improvisation. Yana are concerned with space, texture and the subtle nuances of musical conversation, but also allow for the outpouring of controlled emotion. The titles of these three improvisations—"babies," "the children," "The People"—are suggestive of growth and development leading to the final achievement of efficacy and mastery.

"babies" begins haltingly with small sounds that seem only loosely connected with each other. Voices emerge, individually at first, gradually shifting into the turn-taking of dialogue before transforming into a powerful statement by vibes but driven by bass and drums. With "the children"—to continue the analogy—it's as if the grasp of language is now more complex, more confident in play. Sounds are now layered upon each other, the metallic tones of vibraphone upon the wooden timbres of the bass and skin of the drums, before the track rises in a musical babel.

By the final track, "The People," Yana is all grown-up but still enraptured by the possibilities of play. The music builds slowly from individual statements to flow freely before its final deluge and abrupt curtailment. It's an impressive conclusion to what is a very coherent, intelligent piece of music-making.

What kept you guys?

babies; the children; The People