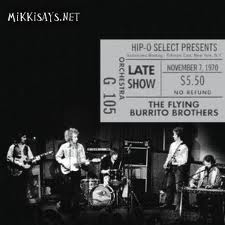 Gram Parsons began The Flying Burrito Brothers with Chris Hillman when the two men left The Byrds in 1968, but the group continued on admirably without Parsons, under Hillman's stewardship, in the role of bassist, singer and songwriter.

Authorized Bootleg: Fillmore East compares favorably with the latter-day Burritos' live Last of the Red Hot Burritos (A&M, 1972), if only because the bulk of the material consists of originals Parsons wrote himself, like the streamlined chug of "Lazy Days," or collaborations including the harmony-laden "Cody Cody." Never a reliably polished performing unit in its early days, The Burritos, circa November, 1970, plays like a tight fleet unit on the wry "Me & My Uncle"—like most of the tracks here, models of taste and economy, both instrumentally and vocally.

More eclectic than often given credit for, this band interwove elements of gospel, such as the largely acoustic "I Am A Pilgrim," with R&B, in the form of "Willie & the Hand Jive," along with pure strains of country and bluegrass, like "Dixie Breakdown." Guitarist Bernie Leadon, who would eventually leave The Burritos to form The Eagles, brings a colorful staccato style to tunes like "Christine's Tune" (aka "Devil in Disguise"), where his instrument seamlessly meshes with the fluid lines coaxed from Sneaky Pete Kleinow's pedal steel, whether or not he applies the distortion that courses through that Hillman/Parson collaboration.

As Hillman notes in his brief notes to this limited edition (7000 only), guitarist/vocalist/composer Rick Roberts joined the group to bolster the Singing, and his stylish turn on Mick Jagger and Keith Richards' "Wild Horses" reaffirms that decision. In contrast, the rootless, derivative nature of his original, "Feel Good Music," is in stark contrast to the authenticity of the music surrounding it. Oddly obtrusive fade-ups of crowd applause on the CD would seem to belie the fading fortunes of The Burritos Brothers as time elapsed. Though the group continued on with varying personnel for some time, performing and recording in a variety of incarnations into the '80s and 90s, Roberts and original Byrds drummer Michael Clarke would form Firefall, and effectively garner the commercial success that eluded their forebears.

Nevertheless, just a cursory listen to Authorized Bootleg: Live at Fillmore East New York NY Late Show 1970 demonstrates how neatly The Flying Burrito Brothers would fit into the demographic of contemporary country. This is a title substantial far beyond its 41-minute playing time.

About The Flying Burrito Brothers