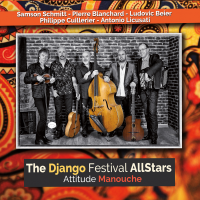 It is a little known fact that Django Reinhardt was not only an incredible guitarist, he was also extremely good at stealing chickens. For the manouche clan of gypsies to which he belonged, this was a noble skill. He was saved from life as a chicken thief only when given a banjo-guitar at age 12. He became obsessed with the instrument, learning by mimicking the fingerings of established musicians, such as his uncle Guiligou. By the time he was 15 he was earning a living playing it and his chicken-stealing days were over.

British bandleader Jack Hylton offered Reinhardt a job but before he could start, the caravan in which he lived caught fire. Reinhardt's left hand was badly burned and doctors discussed amputating one of his legs. A horrified Reinhardt refused surgery and discharged himself from hospital. Within a year he could walk with the aid of a stick and had developed techniques for playing guitar with his crippled hand.

Having regained his fluency, he teamed up with violinist Stéphane Grapelli and in 1934 the duo formed the basis of the legendary Quintet Of The Hot Club of France, creating what is now known as manouche jazz, which is played mainly on stringed instruments. Today manouche is played all over the world mostly by devoted fans intent on the faithful reproduction of numbers from Reinhardt's repertoire.

The All-Stars of the Django Festival at Birdland, in New York City, dare to be different, not content to merely regurgitate songs such as "Minor Swing" and "Sweet Sue, Just You." All the numbers here are originals save one and that is the less-than-familiar theme from the movie "Schindler's List."

The music the All Stars play is fast and mostly light-hearted, though by no means easy. Lead guitarist Samson Schmitt, plays a Maccaferri guitar, like the one favoured by Reinhardt. Violinist Pierre Blanchard takes the role played by Stéphane Grapelli.

The title number, "Attitude Manouche," written by Schmitt, is reminiscent in places of "Them There Eyes," a number Reinhardt recorded in 1938. It moves along at a fair clip, with some fine fiddling by Blanchard.

Blanchard's ballad "Troublant Romeo," features an excellent solo from Schmitt then gets a little lost melodically before its author brings it all back together for the finale.

"Late Train," by Ludovic Beier, is the stand-out track, with excellent solos from all concerned.

Schmitt's "Lovely Wife" is a dreamy, romantic ballad, which -just as you expect it to wind down -is revived with a tasteful, understated solo from its creator. By now, Django is long ago and far away and the proceedings are verging on present day schmaltz.

The closer, "Viens Chez Django" features an unsuccessful vocal by its author, Philippe Cuillerier, that is not helped by his own infantile lyric—a shame it was included. Apart from this, there is much devoted manouche fans will find appealing. Non-devotees may be put off by the strings-only formula and Blanchard's rhapsodic fiddle playing.

About The Django Festival All-Stars