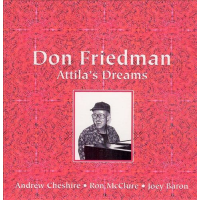 Sixty-seven year old pianist Don Friedman has followed up his very fine 1999 recording, Match Point. Here we find the pianist with a new group and a new label. The music is of the same high quality as his previous recordings. A fixture on the West coast during the 1950s, Friedman performed with the likes of Dexter Gordon, Shorty Rogers, Buddy DeFranco, and Chet Baker. This prepared him for his solo career, which has been proceeding since his first recording, A Day In The City (OJC 1775, 1961). On Attila's Dream , the very fine guitarist Andrew Cheshire, bassist Ron McClure, and drummer Joey Baron join Friedman on this recording. This cheerful quartet navigates its way through the two bookends of opener and closer (John Carisi's "Israel" and Tadd Dameron's "If You could See Me Now") and originals by all but Baron. Ron McClure's "Pink Cloud," originally released on his Naxos recording Pink Cloud is given a fresh workout, as is Cheshire's "Attila." On the whole, Attila's Dreams is worth a listen if not many listens.