BY C. MICHAEL BAILEY
October 3, 2015
Sign in to view read count
Track review of "Fratres for piano and violin" 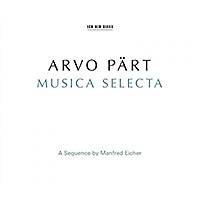 Talented, urbane, and well-informed colleagues like John Kelman often make for a difficult act to follow. Kelman has long been the All About Jazz resident expert on all things ECM. Occasionally, his reportage does intersect with mine as in the present case of Estonian composer Arvo Pärt (b. 1935). I want to refer the reader first to Kelman's vital coverage of the recent Arvo Part: Musica Selecta: A Sequence by Manfred Eicher (ECM, 2015). The importance of this composer, this release and the circumstances surrounding them both cannot be over- estimated.

Kelman points out in his review the fortuitous meeting and resulting simpatico relationship that developed between ECM helmsman and producer Manfred Eicher and Pärt, a creative partnership lasting the better part of the past 35 years. It was Eicher and Pärt who inaugurated ECM's New Series imprint with Arvo Pärt: Tabula Rasa (ECM 1275 NS) in 1984. While addressing Pärt's contributions, Kelman also highlights the superb programming acumen of Eicher in assembling and sequencing Arvo Pärt: Musica Selecta, allowing the production of the release take the same stage as the music and its performance.

The intersection of an essential, living composer with a forward-thinking record label par excellence was unheard of before now. The closest comparison of such empathy between artist and "producer" was the special relationship shared between conductor Arturo Toscanini and composer Giacomo Puccini. And, I have to believe that Eicher and Pärt got along better with one another. What Eicher has accomplished with Arvo Pärt: Musica Selecta: A Sequence by Manfred Eicher is the most passionate and intelligently-assembled surveys of a living composer.

When considering an expansive consideration of an entire creative lifetime, it is helpful to consider the cultural context of the composer and his or her importance to it. Since the death of English composer Sir John Tavener in 2013, Pärt has had no peer in the realm of choral music if not all composition. Pärt and Tavener shared in common religious conversion from mainstream Protestant religions to Russian Orthodoxy. This conversion profoundly informed the music of both men, who excelled in mystically-inspired choral and liturgical music.

In such an increasingly secular and religiously atomized global civilization, Pärt, through his music, provides a history lesson regarding from where all of our thought comes. It is like looking through the wrong end of a telescope backwards in history to the 11th Century, the East-West Schism and before. Dramatically influenced by the Gregorian Chants and plainchants of the 5th-and 6th-Centuries, Pärt developed his now iconic composing technique, tintinnabuli, which has informed his composition since. There are indeed giants among us. It is up to us to find them.

So what of Pärt's inaugural contribution to the ECM catalog, Arvo Pärt: Tabula Rasa. Eicher selected two of the four compositions for the present Musica Selecta: "Cantus in Memory of Benjamin Britten" and "Fratres for Violin and Piano." "Fratres" ("brothers" in Latin) is an instrumental compositions demonstrating Pärt's tintinnabuli method of composition. Pärt's first version of the piece was composed in 1977 and scored for string quintet and wind quintet. Between 1977 and 1992, Pärt adapted the piece in scores for solo violin, string orchestra, percussion, and for violin and piano. It should be noted that not all versions are created equal. The performances of viola and piano, or cello and piano, are almost exactly the same as that for violin and piano, whereas the string quartet version is more similar to that for cello.

The present violin/piano rendering by Gidon Kremer and Keith Jarrett is a study in musical dynamics, translating through musical sections that are both frantic and urgent into those tranquil and calm. Pärt himself defined this dichotomy as ..."the instant and eternity are struggling within us." Kremer opens with evolving anxiety defying resolution until a single note from Jarrett marks a passage of tranquil calm. The figures Pärt composed are simple and elegant. Kremer and Jarrett capture both in the central section. While Jarrett holds reign, Kremer begins a tuneful, but fretful climb behind Jarrett's peaceful playing. The effect is halting as Pärt intended it to be.

As a reflection of the entire Arvo Part: Musica Selecta: A Sequence by Manfred Eicher, "Fratres for Violin and Piano" provides a good start. The entire release represent the best programming of Pärt's music yet undertaken.