By Henning Bolte
March 9, 2013
Sign in to view read count 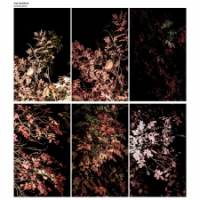 Arve Henriksen is one of today's most innovative, creative and busiest musicians in improvised music and jazz. He has his very own signature—first as a highly characteristic trumpeter/singer, but on other instruments and vocals, too. Those who only know him from his Cartography (ECM, 2008) or through his numerous sideman appearances, do not really know him—at least, not well enough.

Solidification is a wonderful remedy, a worthwhile dig. This limited edition, seven-LP box set contains the music from his three albums for extraordinary Norwegian label Rune Grammofon—Sakuteiki (2001), Chiaroscuro (2004) and Strjon (2007), all expanded with bonus tracks from their respective sessions—augmented by a previously unreleased recording, Chron (2012). It is a set which not only documents the development of a remarkable musician but also the essential features of musical evolution in the last decade.

Henriksen released an album every three years, spread over the decade: a process with leaps, maturation, gradual hardening, curing, sedimentation and solidification. The sounds from Henriksen's instrument and the overall sound of his first album, Sakuteiki, created by producer Helge Sten, were quite uncommon, new and challenging—an approach which cut deeply. By way of collecting, manipulating and assembling musical sounds, Henriksen introduced a new way of perceiving the world and experiencing reality, which still resonates strongly today.

The stone percussion of "White Gravel" is framed by "Planting Trees Creating Beauty," with its voice far in the distance, chasing trumpet sounds and Aeolian harp wavering, and "Shrine," with its expectant surging bass waves and solemn trumpet lines—all within the imaginative space of Sakuteiki, the thousand year-old Japanese book on the art of gardening.

Chiaroscuro was, again, a revelation. Amidst vaporous wisps as well as condensed sound, Henriksen's own heavenly falsetto singing voice ("Blue Silk"), together with Audun Kleive's percussion, rises up. Electronics wizard Jan Bang is the one to produce the music's liquidity, to evoke its flowing flow. This constellation creates "Opening Image," Henriksen's best-known piece. Henriksen had, meanwhile, grown beyond imitation—no longer emulating the Japanese reed flute shakuhachi and duduk sounds—to create his very own sound palette, using it musically in highly sophisticated ways. From mimicry to expression, Henriksen is a double-natured flexibus—a strong leader as well as pliant sideman, an angel as well as hobgoblin.

"Opening Image" supposedly contains the deepest iconic sound trace of Henriksen in our collective memory. On Chiaroscuro, he dissects the shadow-and-light-contouring into its constituents. "Chiaro" opens up to great lightness and depth of space, and in its consort piece, "Scuro," hints of trumpeter Jon Hassell and Norwegian composer Jean Sibelius shimmer. "Bird's Eye View" has a daring musical perspective, while "Holography" possesses distant echoes of trumpeter Nils Petter Molvaer.

On Strjon, named after the place of Henriksen's birth and childhood, not only sound and form have become liquid. Henriksen now works on different temporal dimensions and perceptions. There are diachronic and synchronic cuts, chronological time confronted to inner time experience. Henriksen, the eager sound-botanist, includes sound sources collected in the recent and distant past, as well as all kind of samples. Meanwhile, his acoustic sound has evolved and changed, by way of these duets with either keyboardist Ståle Storløkken or guitarist Helge Sten, to continue reviewing, reminiscing and reflecting, listening to all the recorded sounds.

Strjon opens with "Evocation." Its sound is rubbly and dirt-dusted, permeated by brutal volume, crashing and creaking, as well as will-o'-the wisp ("Black Mountain"). Beside the solitude of "Wind And Bow" there is the pure beauty of "Green Water" and deep cosmic rumble of the title track, whereas the folksy "Alpine Pyramid" possesses some baroque references. This variety does not only emerge from his engagement in a lot of different musical enterprises; it is, first of all, the after-effect of self-confrontation, working on transformations to evoke propulsive energies and ignitions. Here joining forces with Storløkken and Sten—co-combatants in the strictly improvisational group Supersilent—Henriksen moves between the sounds forged by Sten and Jan Bang, which ultimately became a driving force of Punkt, with its annual festival in Kristiansand, Norway—an important place to crystallize and push the musical envelope.

He would not be Henriksen if he would not add something reaching even further. Chron, a completely new work, confronts through a new level of gathering, accumulating and assembling sound. Sound and sound-production have become increasingly ambulant. As the editorial notes say, "All material was recorded and edited by Arve Henriksen, at home and on various locations as hotels, airports, airplanes, train stations and backstage in Norway, Sweden, Germany, Italy." For Henriksen, the sound collector, the time of classic studio recording has gone. He is permanently recording all things that grab his attention and edits them, thereby sharpening his perception and memory as he "discovers and arrives at links between potential musical building blocks." The resulting music, in Henriksen's case, always contains traces of such detection, and the subjective experience of the creative artist himself. It is this indication of Henriksen's inner urge, which forms such a distinctive quality.

Chron is a kind of genesis story, with itles like "Proto-Earth," "Archean" and "First Life"—even "Plume of Ash,""Magma Oscillator" and "Plate Tectonic." Starting in fragmented vacuity, on first listen there's nothing on which to get a hold. It's only with the fourth track, "Solidification," that trumpet signals loom up. In an ongoing process, Henriksen organizes the music into a coherent whole by way of fragmentation, expansion, ringing, sliding, puffing, reverberating and pulsating. This was not a linear process aimed at clearly outlined outcome; the underlying logic had to be discovered during post-production with producer Helge Sten, when the recordings had to be put in a significant perspective and significant order.

Chron stands for an awareness that everything happens in passing time, that the passing of time and the energy of creating new things belong together and thus may recur renewed. According to Henriksen, he was not really aware of this from the outset. He recognized it only later, together with Sten. The pieces are sketches of different sorts, all caught in the tension of nail down and let go, thereby revolving around the volatility and elusiveness of form. Genesis as a daily experience. A counterweight on current crisis lamentos, spinning in circles.

On Chron, Henriksen also ventures to rely not too heavily on his famous trumpet sound; rather, he dares to explore "certain areas of sound and sound quality on other instruments, especially percussion (as in Supersilent) and keyboards." It renders no comfortable listen at the beginning; it is not full of nice enigmatic lulls. The adventure here lies in the journey along the various stations to an unknown, surprising and enjoyable release. It is the experience of the discovery itself which is at the center here—the sharing of it and the experience of progressive shaping.

Together with Helge Sten, art designer Kim Hiorthøy and liner note writers Fiona Talkington and All About Jazz's John Kelman in an illustrated, 24-page booklet, Henriksen and Rune Kristoffersen, the head of Rune Grammofon, have created and brought to the world something extraordinarily illustrious. It is, without intention or announced as such, a wonderful, impressive milestone for the fifteen-year anniversary of the label. Hopefully there's more to come for a long time.

Seven solid vinyl LPs, with each of the three original albums distributed over two LPs and enriched with eight unreleased tracks from the three productions: "Sanmyaku" and "Bonsai Ritual" (Sakuteiki); "Short Frame," "Jump Cut "and "Clear But Obscure" (Chiaroscuro); and "Triangularity," "Metals" and "Home" (Strjon). And then the new work, Chron, pressed onto the seventh LP in white vinyl. Seven LPs and everything again on two DVDs with high-resolution files, both in 16 and 24 bit, 44 and 96 kHz and FLAC (lossless audio) quality, making downloading unnecessary. Everything the ear may desire. What might seem excessive at first glance is, again, a revelation. The sound of different media is different, of course, but is a really revealing and surprising experience. The most amazing sound of Chron is on, yes, the white vinyl. The different possible ways to use the elements of this set are as varied as they are longstanding.

Thus, on Solidification, various elements come together in a highly productive and pointed manner. The open cycle of live performance and studio, and live electronics in concert (with different sources of field recordings and samples, including vinyl), all reflect the post-listening of concert recordings, which in turn lead to feeds into live electronics that may guide experimentation with acoustic performance techniques. Also, when repeatedly running through this cycle—live or in the studio—recorded parts are collected, assembled as part of a new production of tracks, to be duplicated digitally and finally turned analog, pressed onto vinyl. What is pressed onto vinyl has found its form and can only be dissolved and transformed by "slow" manual selection and manipulation..

Vinyl is a move back into a remembered (pre-digital) era—at least for those more than 30 years old. It also is a piece of solidity compared to today's increasing volatility and elusiveness of musical form. As bold as the volatility of form is, on Solidification it is dealt with through the greater sense made possible by vinyl's sedimentation and listening experience.