Temple Jazz Orchestra: This Is TJO 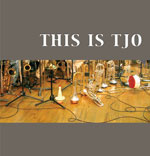 The Temple Jazz Orchestra, which began life about fifteen years ago as a part of the Jazz Studies program at Temple College, has evolved into a professional ensemble whose members include a number of the best big band musicians and educators in central Texas. The TJO was founded by its current director, Tom Fairlie, who triples as director/conductor of the Temple Symphony Orchestra and division director of Fine Arts at Temple College.

This is the TJO's third album. Unlike the ...

On first hearing, Soft Lights, Sweet Music left me shaking my head in disbelief. How, I wondered, could a Jazz ensemble from a two–year college in an undersized east–central Texas town possibly be that good? Something in the drinking water, perhaps? Seeking an explanation for the TJO’s remarkable proficiency, I turned to the liner notes and read the following: “Begun as a collaboration of students and adult musicians, the [TJO] has grown into a major professional ensemble. The mix is ...