It wasn't just Pepper and Baker who were strung out during the 1950s. Of the thirty or so musicians heard here, at least twelve are known to have had habits 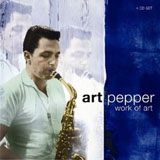 Anyone dipping their toes for the first time into the recorded legacy of the fitfully prolific Los Angeles-based alto saxophonist Art Pepper (1925-82) is best advised to start with the two series of albums Pepper recorded for Contemporary, one in the period 1957-60, the other in the mid 1970s.

By the time of the Vanguard sessions, Pepper had replaced a massive heroin habit with an Olympian cocaine one—a photograph of him in the club's kitchen, published in his autobiography Straight Life: The Story of Art Pepper (Schirmer Books, 1979), is painful to look at, he's so haggard. Practically his entire career was blighted by hard drug use. Or to be more accurate, the legal consequences of it—for Pepper made many great albums strung out on heroin or cocaine, falling into enforced silence only during his years in jail.

Proper Records' characteristically no-frills, but well selected, four-disc collection, Work of Art, rewinds Pepper's story to the years 1952-57. It begins with his first dates as leader after leaving the Stan Kenton orchestra, proceeds chronologically, and includes as its penultimate sequence of tracks Meets The Rhythm Section. The later Contemporary albums, of course, fall within the 50-year copyright rule and are unavailable to labels like Proper.

The first three discs in Work of Art include some outstanding early sessions and also, in the gaps between them, harbingers of the desert that was the 1960s. Disc one opens with four tracks recorded in early 1952, made with Pepper's debut quartet, then causing a small sensation at Los Angeles' Surf Club, and featuring pianist Hampton Hawes, bassist Joe Mondragon and drummer Larry Bunker. These exuberant, foot-on-the-accelerator tracks (with "These Foolish Things" a sole, exquisite ballad), give a suggestion of the joy it must have been to hear this group live—a pleasure that clearly extended to the musicians themselves (and which is eloquently expressed by the immense smile on Mondragon's face in a photograph from the Surf Club included in the liner booklet).

Between that session and Meets The Rhythm Section—made with pianist Red Garland, bassist Paul Chambers and drummer Philly Joe Jones—the Proper set samples some of the recordings Pepper made either side of prison sentences in 1953-4 and 1955. Amongst the most enduring are those made in late 1956 with a sextet co-led by trumpeter Chet Baker and including tenor saxophonist Phil Urso, pianist Carl Perkins, bassist Curtis Counce and drummer Lawrence Marable. The band's spirited momentum inspires Baker—another spectacular heroin casualty, whose music often seems the aural equivalent of nodding off—to unusually fiery solos.

It wasn't just Pepper and Baker who were strung out during the 1950s, of course. Of the thirty or so musicians heard on Work of Art, at least twelve are known to have had habits at some point during the decade. Most of them came out the other end OK. Not all though; the gloriously swinging Carl Perkins was killed by the drug in 1958, aged just 29. Pepper, a survivor whose 1975 album fully deserved the title Living Legend, succeeded in making some blinding music when not incapacitated or incarcerated. Work of Art chronicles the emergence of his genius and is well worth checking once those stellar Contemporary albums have been absorbed.


Tracks: CD1: Brown Gold; These Foolish Things; Surf Ride; Holiday Flight; Chili Pepper; Suzy The Poodle; Everything Happens To Me; Tickle Toe; Nutmeg; Deep Purple; Cinnamon; What's New?; Thyme Time; Straight Life; Art's Oregano; They Way You Look Tonight; Angel Wings; Broadway; Five More; Funny Blues; Mambo Del Pinta; Minority. CD2: Patricia; You Go To My Head; Abstract Art; Over The Rainbow; Melancholy Madeleine; Sidewinder; You And The Night And The Music; All The Things You Are; Marty's Blues; Pitfall; What's Right For You; For Miles And Miles; Picture Of Heath; Minor Yours; C.T.A.; Resonant Emotions; Tynan Time; For Minors Only. CD3: All The Things You Are; What's New; I Can't Believe That You're In Love With Me; Tickle Toe; Avalon; Bewitched; Blues In; When You're Smiling; Cool Bunny; What Is This Thing Called Love?; Stompin' At The Savoy; Diane's Dilemma; Blues Out; The Man I Love; You'd Be So Nice To Come Home To. CD4: Birks Works; Imagination; Jazz Me Blues; Red Pepper Blues; Star Eyes; Straight Life; Tin Tin Deo; Waltz Me Blues; Surf Ride; Body And Soul; Too Close For Comfort; Summertime; Fascinatin' Rhythm; Begin The Beguine; Webb City.