By EYAL HAREUVENI
November 2, 2012
Sign in to view read count 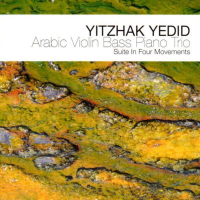 Australia-based, Israeli composer and pianist Yitzhak Yedid continues his noble endeavor to integrate classical Arabic music, Arabic-influenced Jewish music and contemporary Western classical music, all performed with enough room for improvisation, into a new tradition. Yedid began to work on this inclusive, universal musical concept previously with the extended suite Oud Bass Piano Trio (Between the Lines, 2005). Arabic Violin Bass Trio: Suite In Four Movements does not focus on musical aspects alone, but attempts to reflect and contain the tensions between the conflicting Eastern and Western cultures, the ancient and the new and the religious and the secular, with a model for understanding, wisdom and compassion.

This impressive suite, as in all Yedid's major compositions, consists of movements that suggest cinematic images, emotions and events that correspond with the variety of musical styles and contrasting compositional approaches and modes. These inter-textual elements have an accumulated effect on the narrative of this impressive suite. The differences>, for example, between the Arabic scales (the Maqamat), their forms of improvisation (the Taqsim) and the Jewish prayers and themes become dim and the similarities tangible.

The second movement is reverential and dramatic in its spirit as it was inspired by the prayers of Yom Kippur, the holiest and most solemn day in the Jewish calendar. The most impressive movement is the third. Here, Yedid begins with the distressing image of a "homeless Holocaust survivor on the streets of Tel Aviv" and concludes with the transformation of this image into a moral call for responsibility, empathy and community action, translated into a musical idea that merges Jewish prayer mode with Christian chorale that symbolizes an act of a congregation.

The fourth movement is lighter and consists of eight short and colorful sections. This movement summarizes all the musical elements manifested throughout the former movements into a joyful, optimistic and reconciling musical vision.

First Movement: Taqsim, dedicated to the day of tomorrow, The image of an old weary man, The pianist’s gaze, Poetic fractions, Evolution of hatred and bitterness, His final request; Second Movement: The High Priest’s whispered prayer on Yom Kippur as he leaves the Holy of Holies, The dancers’ gleeful cries, Olive branches in the candelabra, Belly dancing in an imaginary cult ritual, Eruption, “And thus would he count”, An even more powerful eruption, “One, one and one, one and two, one and three, one and four, one and five”: Third Movement: Image of a homeless Holocaust survivor on the streets of Tel Aviv, The double bassist’s voice, Awakening the dead, An Israeli chorale, dedicated to the Holocaust survivor: Fourth Movement: Cries of joy, The violinist’s gaze, Hallucinatory Debka dance, Magic of a sensual belly dancer, And again the cries, The image of the old man from the First Movement, The madness of creation, Epilogue: the prayer of purification.