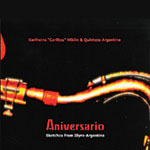 Austrian saxophonist Karlheinz Miklin may not be a household name. Nevertheless, collaborations with trumpeters Art Farmer and Randy Brecker, trombonist Albert Mangelsdorff, bassists Chuck Israels and Graham Collier, and saxophonist Michael Brecker (not forgetting his long association with bassist Ron McClure and drummer Billy Hart) testify to the esteem in which his peers hold him.

Aside from his trio with McClure and Hart and his own Austrian quartet of nearly thirty years standing, Miklin has led the Quinteto Argentina since 1984 and his association with Argentina and its music goes back to the beginning of the 1970s. Aniversario—Sketches from Illyro Argentina (Extraplatte, 2006) is the band's eighth recording and this double CD captures Miklin in energetic and at times inspired form.

The band visits bossa nova and flirts with tango, yet despite this and the presence of Pocho Porteno on conga, this is not overtly Latin jazz; it is rather jazz from Argentina by way of Graz, Austria and the influences in the music are too myriad to label it "this jazz or "that jazz.

The opening notes of the impressive "Baguala de Illyria emanate from Miklin's bass clarinet, a deep leviathan rumble. His sound mutates into a plaintive lament, in turn picked up by trumpeter Gustavo Bergalli. The two harmonize over a funereal drum and sound sweetly melancholic. Miklin's aching bass clarinet solo which closes the song has something of the blues of bandoneon maestro Astor Piazzolla.

Miklin's virtuosity is much in evidence. His tenor is muscular and assertive on the percussion-driven "Cambio, is reminiscent of late-night (saxophonist) Ben Webster at the start of "Palomar, and cries and screeches on the swinging, breezy "Calypso. His playing is notable for its economy of notes, and he shows some of Argentinian saxophonist Gato Barbieri's liking for the dramatic, exclamative approach to soloing.

The quintet has the feel of a little big-band with its tight ensemble playing and brass harmonies and the stylish arrangements allow the instruments to drop in and out without lessening the momentum of the music.

On an album of strong compositions, a highlight is the delightful "Para Pochin, a slow, languid number dedicated to original surviving band member and drummer Pocho Lapouble. Marcelo Major on guitar and Alejandro Herrera on bass play a seductively simple melody over a metronomic percussive beat which sets the scene perfectly for Miklin and Bergalli to give full voice to their respective instruments.

Aniversario—Sketches from Illyrio-Argentina celebrates twenty years of this quintet's activity. The evidence presented here suggests that there is enough enthusiasm and creativity to carry the band for many more years to come.