By PHIL DIPIETRO
October 6, 2003
Sign in to view read count

Dapp Theory?s concept comes from my desire to see the condition of humanity improve. I think there are simple messages out there that get clouded by greed and ultimately keep us from truly living in harmony. 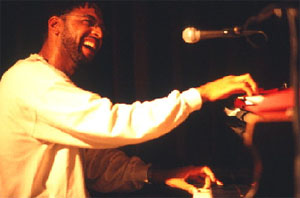 Pianist and composer Andy Milne's music emphasizes badass groove-power that's grown from his roots as one of Steve Coleman 's Five Elements, specializing in some rhythmatic arithmetic that easily grabs more booty than some other M-BASE analogues. He draws inspiration from all types of music and from sociology, philosophy, and science fiction. While noted for sparse harmonic ideas and chord voicings that add texture to his compositions, he's also capable of seemingly effortlessly tossing off choruses full of musical sophistication in variegated timbres. By his own account, the five years from 1992 to 1997, spent as a one of Coleman's Five Elements, complementing and responding to that music gig upon gig, played a major role in the development of this distinctive approach.

During his run with Coleman, Milne independently booked, promoted and led four extensive tours of North America with his own band, releasing a now rare, self-produced cassette in 1995, called the 'The 'E' is Silent,' that featured incendiary performances by Gene Lake on drums, Matthew Garrison on electric bass and vocalist Audrey Martells. His 1997 CD, Forward to Get Back , features drummer Mark Prince, bassists Garrison and Reggie Washington, trumpeter Ralph Alessi and two duo performances with Coleman. Milne left Coleman's band after the release of this record to devote more energy to touring and recording his own projects and to pursue appealing offers from other musicians, including Ravi Coltrane , Carlos Ward, and Grammy-nominated vocalist, Carla Cook.

In 1998 he formed his Cosmic Dapp Theory, now shortened to Dapp Theory, releasing New Age of Aquarius a year later on his own label, which sports the telling moniker Controlology. The newest Dapp Theory release, Y'All Just Don't Know, hits the street on August 12th, with major label backing from Concord Records , who have made the band part of its 30th Anniversary Plan. Dapp Theory has made some powerful personnel shifts between releases, and has taken steps to cross over their fan base, including three songs documenting their collaboration with fellow Toronto native and socio-political folk icon Bruce Cockburn . But they haven't changed their conceptual focus, which translates perceptibly aurally. Milne wants his music, 'to go beyond notes and rhythms. I want to use it to tell passionate stories, promote peace and inspire collective responsibility towards uplifting the human spiritual condition. While M-BASE stood for creatively expressing one's life's experiences through music, Dapp Theory stands for respecting the laws of nature to create balance in love, compassion and good karma. The music seeks to explore the truths which exist in universal cosmic wisdom, while creatively expressing life's great journeys.' We'll let the man take it from there himself.

Allaboutjazz:If you don't mind, please tell us how old you are and where you're from.

Andy Milne: I am 36 years old and I was born in Hamilton, Ontario, Canada. When I was very young, I grew up in the town of Kincardine, two hours northwest of Toronto. I lived in Toronto from the age of 13 onwards and spent the majority of my formative years in terms of my musical training and experience in Toronto so that's why I say I'm from Toronto when asked that question.

AAJ: How did you first get into music?

AM: I first got into music when I started piano lessons at age 7. I later taught myself guitar and played alto saxophone in school, but piano was always the instrument I knew I'd be playing.

AAJ: Who were your first influences, as a musician, and more specifically, on piano?

AM: I think folk music, classical music and pop music from the mid 70s were my first influences. The first pianists I began checking out were Les McCann, Oscar Peterson, McCoy Tyner and Duke Ellington. Later I got way into Bill Evans and Herbie Hancock and eventually Herbie Nichols and Art Tatum.

AAJ: Was there an evolution in influences, or was there a point when you feel individual influences stopped?

AAJ: What musical experiences in Canada precipitated your attendance at York University in the late 80s?

AM: I attended York University in Toronto. At the time I was finishing high school, Oscar Peterson was an adjunct professor there. I knew I wanted to have the option of studying other academic subjects, but the attraction of Oscar made York seem like the obvious choice. Plus, Toronto is like the New York of Canada with all the best players migrating there, so I wanted to stay close to that scene.

AAJ: Why did you pick York University? Was your time there your most intense growth period as a musician?

AM: I can't say it was my most intense growth period, but when you are young every period seems intense because you tend to learn quickly and have a lot of energy. When you get older you tend to take more time to learn, and the way you learn evolves. So far, each period of my life has had a unique feel or flavor and that's how I relate to each period versus if it was the most intense or not. Each period was intense for something unique to that period. That's the best way I can put it.

AAJ: You seem quite comfortable with the intricacies of music theory and its application to improvisation and composition. How much of that element do you bring into the compositional process? It probably varies based on the composition and the goals of the composition, right?

AM: Here's where evolution comes into play. There's what I used to do, and there's what I do now. I think I have the ability to compose from a very theoretical, conceptual position and I also have the ability to compose from a more intuitive, let it flow position. Both have strengths and quite honestly, I strive to allow myself the space to find that balance when I'm creating. It varies based on the composition because some songs are born out of a theoretical study so it's only natural that you'd be applying those theories in the composition itself. Other times, it's all about the vibe.

AAJ: Your bio says that after York University you went to Banff, which was fortuitous because Steve Coleman was the head of the faculty at the time. Can you expand on that period?

AM: After York, I went to Banff largely because I knew a lot of musicians in Toronto who raved about their experiences there. Dave Holland was the artistic head before Steve and it seemed like a lot of cats really benefited from the 'Banff Experience.' I went with fairly low expectations. I took my bicycle and said to myself, ''worst case, I'm in the mountains of Alberta in July.' It ended up being one of those intensely influential periods of my life. I think of Banff as a sort of 'jazz finishing school' where you focus on concepts not normally taught in the typical jazz college/university setting.

AAJ: What was the thrust of what Coleman was imparting to the average and not so average jazz student at the time?

AM: To me, nobody at Banff was average. Everyone was at different levels in their development, so it came down to whether you were ready to receive certain information, which is basically always the case in life. If you are ready to take something in, then you stand a chance at being able to process that experience and find ways of enriching your own self and music. Steve's most basic message was about 'practicing creatively'-in other words, the process of looking at creative ways of problem solving. Beyond that, he stressed the importance of doing this at the same time as learning the tradition. All I know is that my Banff experience, with Steve and others, came at the right time for me.

AAJ: So how were you then incorporated into his band?

AM: I met Steve in the summer of 1990 and I moved to New York in the fall of 1991. I did my first gig with 5 Elements in October of 1991 in Brooklyn at a club called Roystin's Rhythms. Steve had been wanting to start what he called a 'B band' where he could sort of groom understudies/subs for 5 Elements. Fortunately for me, everyone in the band more or less wanted to be part of it so the concept never really got off the ground. In the end, my first gigs were subbing for James Wiedman, so I was swimming with the big fishes right off the bat. Gilmore, Reggie, and Smitty all kicked my ass in a big way.

AAJ: Were Steve's records the earliest recording projects you did?

AM: After the Roystin's gig, Steve asked me to participate in the completion of the M-BASE Collective CD where I got to contribute a composition. Soon after, we did Drop Kick which also sort of featured the B Band concept a little. Me' shell (before she was Ndegeocello), Camille Gaynor, David Gilmore and myself made up the rhythm section for a few tracks.

AAJ: Tell us about that time with Steve. Whatever highs and lows of that period you'd want to share, we're ready to hear.

AM: I think I'll skip this question because I want people to know about Dapp Theory and the Coleman trap is a common one that can overshadow interviews if one is not careful. Wait .... Ok, I'll say this about being part of Steve Coleman's matrix from 1991 to 2001. He's an intensely selfish generous guy. Yes, these two words would seem to be at odds with one another but that's who he is. Steve is kind of like New York City. He has a lot to offer, but he can bug the piss out of you while doing it. It's a difficult experience 'cause you know you are part of something special but Steve can be a punk when it comes to having your back except when it suits him. Ok, I've said it, now I don't want to devote any more space to getting into that kind of stuff about Steve because I very much value my time with him, despite the personal challenges.