Jim Widner Big Band: And the Beat Goes On 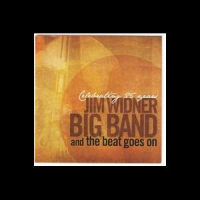 Bassist Jim Widner formed his band in 1987 to carry on the legacy of summer jazz camps established by bandleader Stan Kenton in the early '60s. Since then the band has added touring and recording to its resume; And the Beat Goes On, the ensemble's sixth CD for the Chase Music Group, was recorded in June 2012 to commemorate its twenty-fifth anniversary. That's quite a long time in big-band years, especially when one takes into account deaths and other personnel changes; a second all-star group could be formed simply by holding a Widner band reunion.

Until that happens, the present band is plenty good enough, boasting impressive talent in every chair. And what better way to display that proficiency than by opening with Bill Holman's classic arrangement of Cole Porter's "Begin the Beguine," written for trumpeter Doc Severinsen and here showcasing John Harner's empyrean lead trumpet and a strapping solo by tenor saxophonist Stan Harper. That's the first of nine superlative charts, the next one of which is Kim Richmond's blueprint for trumpeter Dave Scott on another Porter standard, "Everytime We Say Goodbye." Lead trombone Scott Whitfield solos, sings and scats marvelously on his bracing treatment of "Pennies from Heaven," ably reinforced by alto Richmond and drummer Gary Hobbs, while tenor Chip McNeill and pianist Kevin Kehner shine on Richmond's enchanting arrangement of Charlie Chaplin's "Smile."

Larry Panella scored Tom Harrell's Latin-tempered "Terrestris," a sunny vehicle for soloists Kehner, McNeill, Hobbs, alto Dave Pietro and guitarist Rod Fleeman, Richmond the standard "Willow Weep for Me," on which his alto is front and center. Trombonist Brett Stamps' buoyant shuffle, "The Queen of Mean" (trim solos by Stamps, Fleeman and Pietro) precedes the bromidic "What a Wonderful World," featuring trumpeter Mike Vax, and hard-hitting finale, Sonny Bono's "And the Beat Goes On," whose appetizing solos are cooked to order by McNeill and trumpeter Hermon Mahari.

While marking its anniversary, Widner's sterling ensemble has produced one of the more impressive and exhilarating big-band albums in recent memory. Would it be too audacious to ask for twenty-five more years?

Begin the Beguine; Everytime We Say Goodbye; Pennies from Heaven; Smile; Terrestris; Willow Weep for Me; The Queen of Mean; What a Wonderful World; The Beat Goes On.