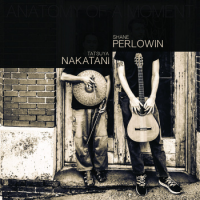 On Anatomy of a Moment, Aleuchatistas guitarist Tatsuya Nakatani & Shane Perlowin joins the legendary percussionist Tatsuya Nakatani for a series of duets that are as perplexing as they are beautiful. Sticking largely to fingerstyle acoustic guitar, Perlowin's controlled and tightly parameterized improvising stands in stark contrast to Nakatani's varied and unpredictable sound experiments. While his playing in the Aleuchatistas is highly electric and aggressive, here, Perlowin seems almost meditative. Taking cues from artists such as John Fahey, Robbie Basho, and Jack Rose, he weaves a rich and unending tapestry of harmonic variety around Nakatani's radical sound craft. An innovator in the art of bowed metals-gongs, cymbals and such- Nakatani's work on Anatomy of a Moment only occasionally resembles percussion-as-we-know-it. The method in the pair's madness is the juxtaposition of two wildly different approaches to improvisation.

Throughout much of this album, Nakatani's sounds take on a chaotic, almost industrial vibe and stand out in sharp opposition to Perlowin's delicate and largely tonal arpeggios. On several tracks, however, Nakatani's percussion seems to run in a path parallel to Perlowin's guitar. "Long Walk Into Night" starts the album off on a spacey psychedelic vibe. Here, Nakatani's bowed metals hover and shimmer over Perlowin's lovely acoustic ruminations, sounding almost like highly distorted electric guitar chords. "Dolorous Duenna" revisits the same territory, though the piece's slow, deliberate pace imparts a spooky, ominous feeling to the pair's interaction. Perlowin switches to electric on two tracks: "Last Night Now" and "Century Seconds." The latter features some of Nakatani's most overtly rhythmic work, and sounds like a long-forgotten sound experiment by Can or Faust. Perlowin hammers and strums his electric on "Last Night Now," achieving a vaguely Middle Eastern atmosphere, while Nakatani's drumkit marches resignedly alongside. The overall effect of this piece is similar to the Sun City Girls' improvisational forays.

The utter brilliance of Anatomy of a Moment is a testament to both musicians' skills as both players and listeners. Striking in both its originality and its daring approach to duet improvisation, it's safe to say that there's nothing else quite like it.