Scenes: Along the Way 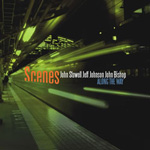 It's easier to impress listeners with virtuosity than subtlety and nuance, but thankfully there are those who take the road less traveled. Along the Way, the second release by Scenes, is the result of three musicians being comfortable in their own skins and having nothing to prove. The vibe may be relaxed and the delivery spacious, but this music proves that one should never mistake comfort for complacency.

Guitarist John Stowell has had a lengthy career with a series of milestones, but he's never attained the widespread fame of contemporaries like Bill Frisell, Pat Metheny or John Scofield. While these three guitarists all have roots in the elegant and deceptive simplicity of Jim Hall, Stowell's reference point is clearer. Like Hall, Stowell's command of the language may be inescapable, but he uses it in such a selfless way that every note feels paramount.

Bassist Jeff Johnson and drummer John Bishop have worked together frequently over the past few years in a variety of contexts, and both are supple and responsive players. Still, this is not a case of guitarist and rhythm section—it's an interactive three-way conversation. There's never a sense of anyone lobbying for dominance. Instead, camaraderie and an ever-present sense of equity predominate, even during clearly defined solos.

The tempo rarely gets beyond medium and the trio members' stance is never aggressive. Bishop, a textural player who never loses sight of the pulse, plays in an understated fashion throughout, making the few occasions where he lets out the stops all the more dramatic. Johnson's "Studio City and "Lonely Blue Angel are as fiery as the trio gets, and while the energy is unavoidable, so too is an underlying commitment to focus and thematic development.

Stowell's easygoing "When Jasper Grows Up brings to mind some of Scofield's trio work, but with a cleaner, warmer tone and phrasing that bears no resemblance to Sco's bluesy mindset. There's nothing sharp or harsh about his style, so even his close voicings and occasional hint of dissonance remain wholly approachable.

There's an airy, ECM-like feel to much of the album, at times reminscent of guitarist John Abercrombie's trio with bassist Marc Johnson and drummer Peter Erskine, but more in its aesthetic than any direct stylistic reference.

Along the Way doesn't stand out in the literal sense. It's neither obvious nor exaggerated. Instead, it's an honest and unassuming record filled with memorable writing and committed playing. One of those rare records that almost insidiously creeps its way into the subconscious on repeated listens, it will, no doubt, remain relevant long after any "style du jour passes from favor.

Stay Right There; Studio City; When Jasper Grows Up; F