Mercury Rev: All is Dream

By Jakob Baekgaard
October 18, 2019
Sign in to view read count 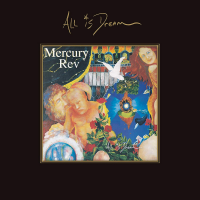 "A year is just a drop in time." This is what singer Jonathan Donahue sang on "A Drop in Time," a song from Mercury Rev's celebrated album All Is Dream. It has now been eighteen drops or years since the band released the album in 2001 and now it's time for a reissue.

Cherry Red Records has certainly done it with style. This edition contains the album and three additional CDs of extra material, including B-Sides, sessions, outtakes and concert material. There's also an essay, song lyrics and pictures in the booklet.

Hearing the album again on the first disc confirms that All Is Dream is a masterpiece of cosmic pop. Calling the music cinematic would be right, but also wrong. The music is not like the accompaniment to a film, but rather like a film itself. Carried by Donahue's distinctive vocal and enigmatic lyrics, the music lifts itself into cosmos with grand orchestral sweeps on the opener, "The Dark Is Rising," but the music also unfolds with profound simplicity on the pared down piano ballad "Spiders and Flies." In-between the intimate and orchestral is a song like the closer, "Hercules." It starts with gently warm finger-style guitar and builds into a grand electric guitar crescendo with soaring vocals, pumping drums and bass and Donahue singing: "Words climb your tongue by the rung like a ladder to speak / Drifting as you go but you row until it seems / All is one, All is mind, all is lost and then you find, All is Dream."

It's a dramatic end to a dramatic album that finds the drama of the music in the human soul. There are no easy answers here as Donohue and the band explore darkness and light, love and pain and life and death. All is Dream has the weight of an existential statement, but the strength of the music is that it asks more questions than it gives answers. It's an enigmatic emotional tableau whose inherent pathos is balanced by strict form and relieved by strong melodies.

The extra material is a treasure trove of new songs, demos and surprises. Especially four genre exercises that say a lot about where Mercury Rev come from. "Streets of Laredo" borders on cowboy kitsch but shows how the band knows the balance between sincerity and mockery. Like any good country music, it works because it's sung from the heart. Classical pieces like "Nocturne (C# Minor)" and "Gymnopedies #3" point to the fragile lyricism found on the album while Beatles' "Lucy In the Sky with Diamonds" is an early proponent of the psychedelic colors that grace All is Dream.

An impressive string of seven outtakes show how much music the band had "in the can," and these are new pieces, and not just takes of songs found on the album. It's also a good reminder of how tight a narrative All is Dream is in spite of its sprawling nature. "Mascara Tears" is a brilliant piano song with wailing harmonica, but its relatively straightforward lyrics fall outside the complex poetry of All is Dream. Likewise, a rootsy song like the shuffling "Silver and Gold" with slide guitar is simply too far away from the cosmic universe of the album. In fact, here's a full EP of material that somehow didn't suit the narrative, with the exception of the beautiful "Cool Waves" sounds as it could have been a good fit. Hearing this material is a reminder of how complex a process it is to construct a true artwork, if it's not just about the sound. For instance, the raw acoustic demos of "A Drop in Time" and "Nite and Fog" have the cosmic seeds of the songs found on the album.

Simply put, this version of All is Dream tells the complete story of the music with different detours that all serve the purpose of underlining the achievement the work was and still is. A dream of an album.